Huge week for the Cats this week as they look forward to playing No. 9 Iowa Hawkeyes in Tucson.

I hope you got your red Arizona gear.  The Athletic Department has called for a "red out" against Iowa on Saturday.  Don't be that guy!!!! 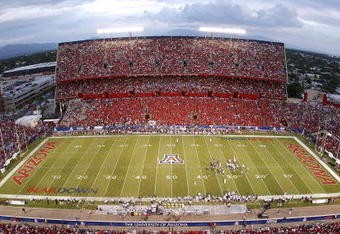 Black Heart Gold Pants posts the top ten reasons why Iowa will lose to Arizona on Saturday.  I'll take all of them.

Thanks again to Black Heart Gold Pants for the preview of the game IN JUNE, 2010!!!! I should have freakin' used this for my season preview!!!!! What a breakdown.

Iowa coach Kirk Ferentz thinks that Arizona was a great team last year and has high praise for Nic Grigsby.

Q. Was there a key to slowing Grigsby down last year?

COACH FERENTZ: It’s easier said than done. Everybody has to be in the right spot. Can’t let him get started. I didn’t say it publicly last year; wouldn’t have been appropriate. But I’ll say it now, I was hoping he would come out in the Draft after our game. Kind of made a mental note of that one. Didn’t happen. Now we get to see him again.

Word is that Iowa will be traveling to Tucson without their D-Coordinator Norm Parker who is in the hospital.  Get well soon Mr. Parker.