Share All sharing options for: UW Game A Little Easier 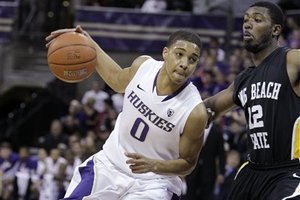 The much anticipated game featuring the Arizona Wildcats and Washington Huskies is almost here. While there will be key match-ups at each position, one player the Wildcats will not have to prepare for is Abdul Gaddy.

For those who do not recall, Gaddy was once an Arizona commit, until the turmoil surrounding Lute Olson surfaced, at which time he changed his pledge to Washington. Earlier this month Gaddy tore his Anterior Cruciate Ligament (ACL) during practice, in preparation for the upcoming game against Oregon. An ACL tear is a devastating injury to any athlete, and an elite basketball player is certainly no exception. These injuries are typically considered 'non-contact', meaning that there is usually no external force applied from another person or object. A common mechanism of injury during basketball occurs when a player comes to an abrupt stop, while planting the foot on the ground. Another way to injure the ACL is during the landing following a rebound. Studies today show that weak hip musculature is partly to blame for not controlling the motion at the knee during the landing phase, ultimately leading to ligament damage.

Regardless of how it happened, the fact still remains: Gaddy is out for the season. While this is terrible news for the young man, and we wish him the best of luck in his recovery, it cannot be understated how much this benefits Arizona not only in Thursday's game, but also at making a run in the PAC-10 Tournament. It should not be forgotten that Gaddy's career high in points came during a game against Arizona at this time last season. Before his injury, Gaddy was averaging a 3.06 Assist to Turnover ratio, which helped UW and their success to start this season. Terrence Ross and Venoy Overton have received the majority of Gaddy's minutes, but it is no secret that UW is not as good of a team without #0 on the floor.

While it will certainly not guarantee Arizona a win this Thursday, one must keep in mind that the loss of anyone in your starting lineup is a significant factor when two quality teams meet. After all, a similar incident happened to a former Wildcat, just before his game against... the Washington Huskies.