Share All sharing options for: Chol set to visit 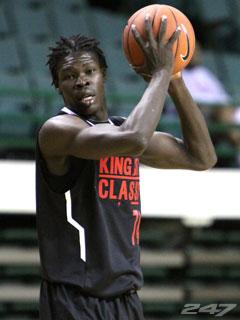 Sean Miller and company will host the 76th ranked player in the 2011 class this week as Angelo Chol makes his way to Tucson on Friday. Chol is a 6-foot-8, 205-pound Center from Hoover High School in San Diego, CA. He is regarded by many around the country as the best big-man left on the board in the 2011 class. His final list of schools includes: Alabama, Arizona, Kansas, North Carolina, and Washington.

While it will not be easy to secure a commitment from Chol, the Arizona staff knows that as long as he sets foot on campus, anything can happen. If Arizona were to land the San Diego big-man, that would secure a monster class, consisting of Josiah Turner (PG), Nick Johnson (SG), Sidiki Johnson (F), and Angelo Chol (C), with all players being within Rivals Top 100. Head recruiting analyst for Rivals.com, Jerry Meyer, had this to say regarding the scenario:

"Currently, Arizona's class sits at No. 9 in the national rankings and as the top class in the Pac-10. Add Chol, who is a four-star center, and the Arizona 2011 recruiting class would likely move to No. 4 in the national rankings. Part of the strong movement up the rankings would be due to Chol. Also factoring in would be the positional balance of this class with all four prospects being able to be on the court at the same time. Another factor is that Johnson will move up from his No. 40 ranking in the final Rivals150 for the 2011 class."

The addition of Chol is important for far more than the national recruiting rankings. It is unsure at this point in time what Derrick Williams' future holds in terms of declaring for the NBA Draft following his sophomore season. If he decides to take the paycheck, Arizona will be left in a tough spot to fill his role in an already depleted Arizona front-court. Kyryl Natyazhko has made improvements since his freshman season, but it is still questionable whether or not he can be Arizona's starting center moving forward. Additionally, Alex Jacobsen will most likely be graduating and leaving the team, while Jesse Perry has not shown an ability to play well against bigger opponents thus far in the season. Adding Angelo Chol to the roster would mean adding depth to a much needed position, while at the same time securing a player that is "Arizona Good" and ready to compete at the next level.

Arizona has already secured the best recruiting class to-date in the PAC-10 with three Rivals Top-100 prospects. However, with the addition of Angelo Chol, the Arizona Wildcats will once again be a Final 4 contender sooner rather than later.