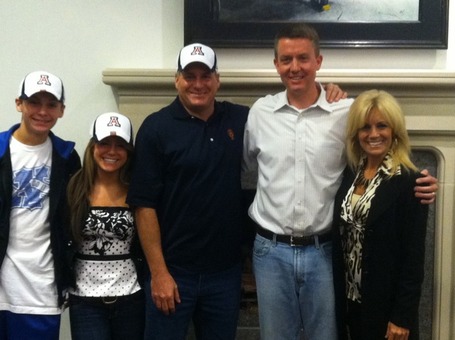 Annnnd there you have it. Greg Byrne announced the hiring of the new Arizona head football coach, Rich Rodriguez, and his family at around 5:38 MST on Monday night via Twitter of all things.

That was fast. That was also typical of Greg Byrne's use of the social media landscape to announce a pretty big decision. Just an hour before he tweeted the photo, Pete Thamel of the New York Times tweeted that he confirmed Byrne to be in Michigan.

What's this mean for Arizona? Fans appear to have mixed feelings about Rich Rod, his Michigan flop and how well his offensive system will work. But with a mobile quarterback in Matt Scott and a talented, young running back in Ka'Deem Carey, we're guessing here that there won't be a whole lot of transfers that will be put off by the hire.

Interestingly enough, Arizona quarterbacks coach, Frank Scelfo, was a recruiting coordinator and tight ends coach at Tulane from 1996-98. From 1997-98, Rodgriguez was the offensive coordinator at Tulane.

Will he keep around Scelfo, who's had a lot to do with the development of current quarterback Nick Foles and of course Scott?