Share All sharing options for: Caption this: Todd Graham talks to Rich Rodriguez 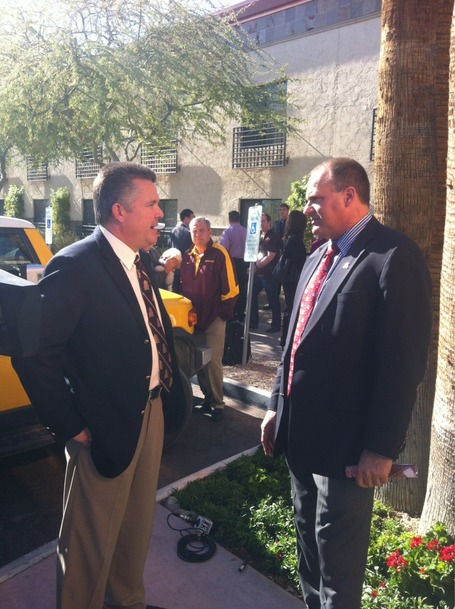 It appears that Toddy is rattling off something that RichRod doesn't give a really big rat's bum about, but of course, I'm sure the ol' chums are actually catching up on life -- you know, how it is moving out west to this weird state where football is more like a casual something to do on a Saturday rather than a "I'm going to stab the heart out of anyone who curses the best sport in the world" type of deal.

Of course, most of us here at SB Nation -- readers and writers -- lean toward the latter, I'm sure.

Anyway, wasn't it awkward that Rich kept talking about "that school up north" and then all of a sudden one of his former assistants turns out to be the next head coach? #NCAAfootballcoachproblems

Please caption the above to your liking in the comments section. I don't have any rewards or anything, but maybe I will praise you for your cleverness. Also, feel free to caption Graham, RichRod AND that dude in the background, who looks pretty pissed that the Sun Devils' head coach is even taking the time to chat up Rodriguez.