"Look at [Rodriguez's] success at West Virginia," Steele said. "He's one of the top coaches in the country, his time at Michigan aside.

"[Arizona] is a much better situation. Michigan was never too interested in running his system," he added. "They don't care [how wins come] at Arizona."

Steele said that as Rodriguez adds recruits, the Wildcats could be in line to challenge for the Pac-12 South division and playoff appearances when the new, four-team tournament format is introduced in 2014.

"In the first five years of the playoff, I see the Pac-12...involved at least 80 percent of the time," he said.

Though the playoff is still a season-and-a-half away, Arizona football is represented in at least one tournament. Steele is working with the Capital One Mascot Challenge, an annual competition to crown college football's favorite mascot.

Steele breaks down teams through exhaustive research and statistical analysis, but his weekly Mascot Challenge rankings are less scientific. Included in his research team are his daughters. Six-year-old Savannah helped Arizona's Wilma Wildcat reach the top 10. 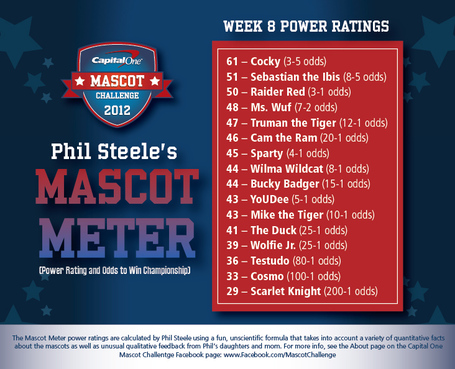 Vote for Wilma at CapitalOneBowl.com and help her into the quarterfinals. This year's winner will be announced during the Capital One Bowl on New Year's Day. Her competition includes mascots with over 100,000 likes on Facebook, such as Texas Tech's Red Raider. Steele said FCS representative YouDee, Delaware's blue hen, is another tough opponent.

While Wilma jockeys for inclusion in the bowl season, so do the football 'Cats. UA earned its first Pac-12 win last week, routing Washington 52-17, and pulled over .500.

Rodriguez has inspired optimism among the Arizona faithful in just a half-season as head coach. Steele said Rodriguez's energy is high, and it reflects in the Wildcats' play. He said a "7-or-8-win...and bowl win" season is within the Wildcats' reach, and anticipates a competitive game with top 10 ranked USC this week.

The offense is humming along, averaging the nation's third highest number of plays per game (87.3) and averaging more than 39 points an outing.

The efficiency with which Matt Scott and Ka'Deem Carey have driven the offense comes as a surprise to many. Not Steele.

"He hasn't exceeded my expectations," Steele said of Scott. "I had him third team All Pac-12 before the season, behind [USC quarterback Matt] Barkley and [Washington quarterback] Keith Price."

"This is the first time [Rodriguez] has had a quarterback fit for his offense in the first season," he explained.

While the Wildcat offense has met Steele's high expectations, he added the the defense is playing to the lowered level he anticipated.

He attributes the Wildcats' defensive up-and-downs to a lack of both size and speed, but all is not bleak. Steele praised Sione Tuihalamaka and Willie Mobley on the defensive, as well as cornerbacks Shaq Richardson and Jonathan McKnight.

Track Steele's in-depth analysis for Arizona and its opponents for the remainder of the season on PhilSteele.com, where visitors can also access his Capital One Mascot Meter.