We set out to find the best, most dedicated Arizona Wildcats fans.

Hyundai wanted to find the best fans out of each of the SB Nation college fanbases. So in an open search for the most wild Arizona Wildcats fans, we unearthed Mr. Anthony Humbert.

I've got to start off with the most awesome part of your Arizona fandom. Tell us about your scheduled birth of your children being around college sports season. And how do you go about broaching that topic with your wife? She must be a very nice woman.

I'm 33 yrs old, have a wife of 9 yrs, 3 boys who are 5 (the twins) and a 2 year old. I graduated high school in 1997 and went to the U of A for a year, then decided college wasn't for me. I live in Tucson and work as a produce manager at Safeway. Regarding my wife, yes, she is wonderful and more understanding than any woman I know. Our decision not to have children during football and basketball months came about because we have several family members with birthdays in the months of September through April. I missed many parties because I simply wouldn't miss an Arizona game. It was pretty easy to justify this to her because she knows how important Arizona FB and BKB is to me and how happy I am during the seasons. If you have ever seen the movie 'Fever Pitch' that is how I am. Whenever anyone would call and try to make plans, my wife or I goes up to the fridge and checks the schedule for Arizona BKB or FB to see if we will be available. The one thing I couldn't justify would be missing my kids' events, so I said "Why get in an argument about scheduling parties and such around Arizona sports when we could just have kids in the "offseason?" She said pregnancy wasn't that easy (c'mon, I'm a guy, what do I know) but would be willing to try. So we looked at the calendar, did the math and saw what window we had to conceive and followed it. Yes, luck has some to do with it, but we had our boys in May 12th and August 1st. I'm the envy of many of my friends because they all have kids during the season and have to miss various games b/c their wives aren't as understanding and wonderful as mine. 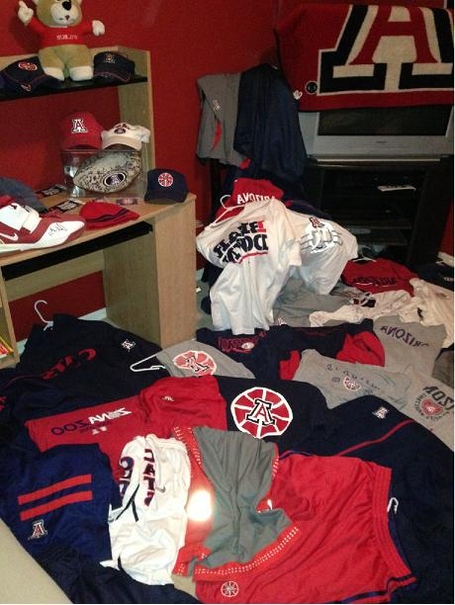 I understand you're so committed to the Wildcats that you even went to games coached by JOHN MACKOVIC. How did you get up for those games and how did you manage to stay through them all? Alcohol? Lying to yourself into thinking they had a chance at winning? And on that note, what do you feel like after Arizona loses games, especially important ones?

I can say I lived through the Mackovic years and lived to tell about it, hahaha. At first, I thought it was a good hire, especially after I saw the first game against SDSU, you know, the whole suit and tie thing, but it didn't take long for the "honeymoon" to be over. I always had hope that things would turn around that's why I kept going to games and I stayed through them because that's what I believe REAL fans do. I remember sitting in the student section specifically during the first quarter of games against Jason Gesser and WSU when I think WSU ran out to a 21-0 lead and seeing half of the stadium empty out and yelling at some people "Don't come back next week!" I'm sure some expletives were also said, but I'll keep this PG, haha. I didn't think it could get worse, until next week came, when Joey Harrington and Oregon came in and put up like 28 in something like 10 mins. It was then that I said, "I haven't left a game early yet, and if I can sit through this, I can sit through anything." To this day I haven't left a game early. I just don't think as a fan, you can experience the joys that come with winning without experiencing the horrible losses. Arizona is in my blood, I can't just stop caring about the teams, I wish it wouldn't completely ruin my week when they lose, but it does and I can't do anything about it, clinically, I think they call that addiction. I would agree.

So let's talk about emotions for a little bit. People take wins and losses different ways. I'm sure winning makes your next week, but how about losses? Do you go into a shell? Get mad? Quiet? How do you deal with them?

I'm a HUGE sports fan, I listen to sports talk radio all day, watch sports more than anything else on TV and basically have more knowledge about sports than anything else, so when Arizona loses that is all taken away because I can't watch, talk, or listen to sports until the next Arizona game. I will drive to work in silence, skip going to any sports websites, and of course, no ESPN. I go through the gauntlet of emotions after a loss, extreme anger, sadness, depression, and frustration. I am a horrible person when Arizona loses I've put holes in walls and doors, broke things and used colorful language to opposing fans. To this day, I still have nightmares about the 2005 basketball debacle against Illinois and consider that game the worst athletic event I have ever witnessed. I also had to take down a Facebook post after Zendejas, well, Zendejased the Tempe Normal game because, apparently I offended some with my profanity laced tirade. Needless to say, I don't handle losses well at all, I've never understood why the losses give me so much more pain than the wins give me joy, and as an Arizona fan, there has been plenty of pain. 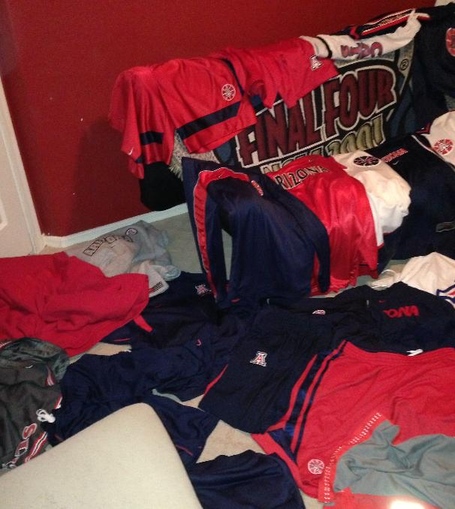 I'm a basketball guys, so, without a doubt, the most proud I have ever been as a Wildcat fan was after the 1997 championship. Words can't express the feelings going through my body after the win. We talked earlier about losses being so painful, and the tournament had been so cruel to Arizona, East Tenn St., Santa Clara and I remember ditching school in '95 to watch Arizona vs Miami (oh) and literally crying after the loss. The moment the Cats won, it seemed like all was made up for, the losses were worth it and I had never felt that way before. We went down to 4th ave and partied, we also ripped a traffic light down and brought it to school the next day as a memento,

The moment that stands out about my fanhood is during the 2000-01 basketball season. My wife (who was my gf at the time) and I decided to attend the UA vs ASU game up in Tempe. We had seats up above the backboard in the corner, above the student section surrounded by ASU fans. That 2001 team was awesome, as you know, and Arizona raced out to like a 20 point lead and had the game in hand the whole time. Well with about 10 mins left in the game, UA was up by like 30 and I noticed a huge stack of flyers at the bottom of my row, in front of the wall overlooking the student section. I went down to see what was on the fliers and it was a picture of sparky stabbing Wilbur in the butt with a pitchfork and it was captioned "Fork UA." I promptly picked one up, turned to all the ASUfans showed the flier and yelled "Who's getting forked in the ass now?!" Then tore it in half. I was boo'd loudly but then noticed a damn near full student section below me, we'll I couldn't let those losers off the hook, so I yelled down to them the same thing and threw ALL the fliers down on them and flipped them the bird. Shockingly I wasn't escorted out of the building, but was boo'd and heckled (about UA never being to a Rose Bowl of course) for the rest of the game. I think staying there among all the ASU fans through all the heckling and crap I was getting after that incident showed a special amount of Arizona fanhood.

By commenting below, you are subject to and accept the terms and conditions of the Hyundai Fanthropology Sweepstakes.