Summer of Gronk Bears Itself

Share All sharing options for: Summer of Gronk Bears Itself

Spiking action figures that just happen to be inspiration for a rival's nickname in an effort to grace video game covers. Appearing on provocative FOX -- game show? Reality show? What the hell genre is "The Choice," exactly? -- programming.

So yes, of course The Summer of Gronk features former Arizona tight end Rob Gronkowski naked on the cover of ESPN: The Magazine. Why wouldn't it? Bonus points for the Hulk Hands, which characterize the fist-pumpingly enthusiastic manner Gronkowski has flourished in the limelight. 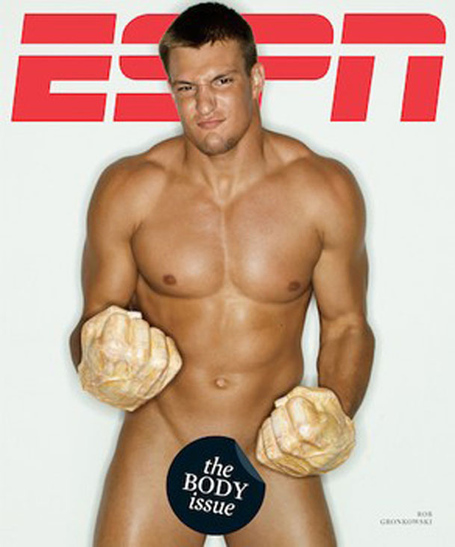 Gronkowski's ingredients of Kellen Winslow, Sr., DJ Pauly D., and Bam Bam from The Flintstones (h/t @mwong22) thrown into a Vitamix and garnished with Zubaz pants have produced a winning cocktail.

However, history suggests Gronkowski won't have another season like his 2011, wherein he caught 17 touchdown receptions. Not because he's incapable, but rather the mark was a National Football League record for any tight end in its existence.

Nicky Minaj's "Starships" dominating airwaves as the unofficial song of The Summer of Gronk is fitting, with Gronkowski floating high in the stratosphere. His star may never burn brighter than it is coming off those historic numbers.

Assuming Gronkowski will not replicate his 2011 production is indeed safe, and certainly sensible. Then again, the Wildcat and YOLO Bro has made a habit of performing beyond expectations.