Arizona vs. UCLA: Statistical comparisons by half for the Wildcats and Bruins

It really was a tale of two halves, but UCLA won thanks to the best half

Share All sharing options for: Arizona vs. UCLA: Statistical comparisons by half for the Wildcats and Bruins

No question that the first half and the second half were very different in Saturday night's game between the Arizona Wildcats and UCLA Bruins.  But just how different?  Here's a couple graphical representations of how Arizona improved at halftime, and UCLA did not. 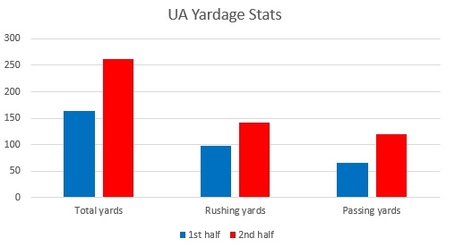 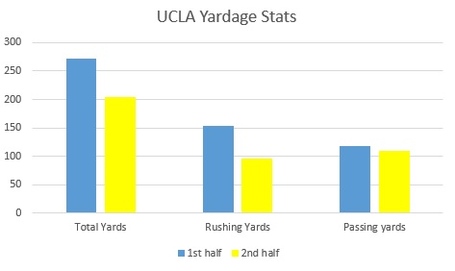 Almost all of UCLA's 95 second-half rushing yards came courtesy of Myles Jack's 66-yard scamper with 10:46 left in the fourth quarter.  If not for that run, Arizona wins this game. 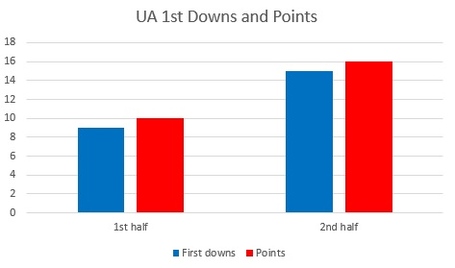 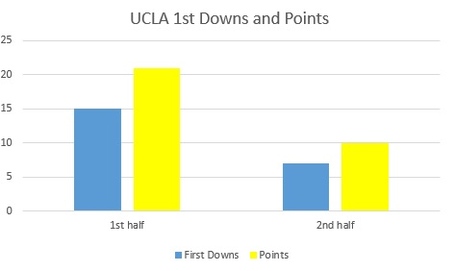 I'd like to think that UCLA's fall-off came because of major adjustments made in Arizona's locker room at halftime.  I also think some of it is due to the Bruins playing up to seven defensive guys on offense on their final drive of the first half.

Anyways, it's not all grim after dropping to 6-3 on the year and 3-3 in conference for Arizona.  The second half showed that this team can compete with the higher-level teams in the conference and in the nation.  And even with such a horrible first half defensively, B.J. Denker and the offense had the ball in their hands two separate times at the end of the game to pull the upset.