After another 100+ yard performance to close out the regular season, Arizona Wildcats running back Ka'Deem Carey has now rushed for over 100 yards in each of his last 15 games, and 19 of his last 20.

Carey finishes the 2013 regular season with 1,716 yards on the ground, putting him fifth in the country in rushing behind Boston College's Andre Williams, Washington's Bishop Sankey, Northern Illinois' Jordan Lynch, and Western Kentucky's Antonio Andrews.  Ka'Deem has played in one less game this year than all of these guys due to his suspension to start the year.

It's pretty clear that if Carey had that 12th game, he would be second in the nation in rushing, and already right on the heels of his single-season Arizona rushing yards record of 1,929 that he set last year.

But if you compare Ka'Deem's consistency to these other players, it's pretty obvious that he had the most steady year, without any extreme days.  Antonio Andrews comes close, but his 99 yard season-opener kept him from gaining 100 yards in each game this year. 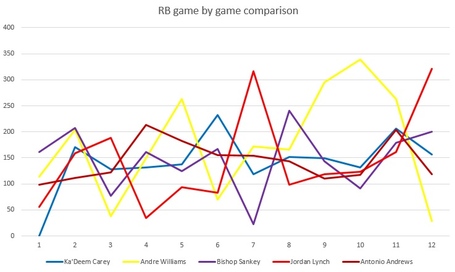 It's sort of a jumbled mess, but if you look, Ka'Deem and Andrews both stay right near the middle, while the other three go to extremes on both sides.

Here's the actual numbers for all five of the guys: 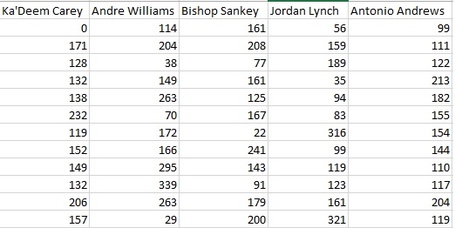 What's most impressive about Ka'Deem's 15 straight 100 yard games is that this season, opposing defenses knew it was coming, and they still couldn't stop him.  Arizona St. controlled him for the first half, but the second half, he just ran right through that tough front seven the Sun Devils have.

Carey also finds himself 78 all-purpose yards shy of setting the Arizona school record heading into whatever bowl game the Wildcats go to.  4,070 career rushing yards, with 46 rushing TDs as well as 679 receiving yards and four more TDs.  That is some sort of career right there for the Tucson-native.

Carey's only a junior, so there's still a small chance he comes back next season.  Imagine the kind of records he could set if he comes back for his senior year with a passing offense that should be a much bigger threat than it was this year.