Arizona vs. ASU hockey: No. 13 Wildcats host a short-handed No. 1 Sun Devils team

Share All sharing options for: Arizona vs. ASU hockey: No. 13 Wildcats host a short-handed No. 1 Sun Devils team

This weekend at the Tucson Convention Center, the Arizona Wildcats will host the No. 1 team in the ACHA, the Arizona St. Sun Devils.

The puck drops at 7:30 PM Friday and Saturday night.  You can watch it live here if you can't make it out to the games.  Arizona enters the series with an even 10-10-0 record, while ASU has opened the season with a school-record 21 consecutive wins.

The Wildcats will be without head coach Sean Hogan as he heads to Italy for the Winter World University Games to serve as an assistant coach for Team USA.

Joining him in Italy will be five Arizona State players: Brian McGinty, Alex Temby, Danny McAuliffe, Jordan Young, and Sean Murphy.  McGinty, McAuliffe, and Murphy are three of ASU's top-six point scorers, so this is the weekend for the Wildcats to end the 34-game winless streak against ASU.  Even if the Arizona head coach won't be there.

In terms of ASU, Arizona has already played them twice, losing both games fairly easily (5-1 and 6-0).  It's no accident they're dominating the competition this year.  Kale Dolinski is their top player.  He's second in all of ACHA with 40 points, but is Canadian, so he will still be coming to Tucson this weekend.

"They have a really deep team this year," continued Hogan.  "All four lines for them score.  We've played them so much we know them like a book.  The thing ASU does so well is you could have it covered, but they have some really skilled kids that can make a play out of nothing."

"That's the hardest part about playing ASU.  You can have everything going well, and next thing you know, some kid just makes a move and what are you going to do?  The kid just beat me."

Arizona St. sort of has a two-goalie thing going on this year.  Joe D'Elia is back this year after dominating UA last year, but has only played in nine games.  The bigger Robert Levin has played in 11 games this season, and has posted a 0.93 GAA with a 0.960 save percentage. 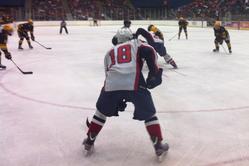 I think this is the deepest an Arizona team has been for quite some time, but they're nothing compared to Arizona St. right now.  But if there were ever a chance to pull the upset and take down the undefeated Devils, this is the weekend to do it.