No. 17 Arizona Hockey at No. 1 ASU: Weekend Preview

Share All sharing options for: No. 17 Arizona Hockey at No. 1 ASU: Weekend Preview

This may be the biggest series for the Wildcats hockey team in several years. No. 17 Arizona (12-16-3) is right on the fringe of making the ACHA national tournament after coming off of two weekend splits vs. No. 5 Oklahoma and No. 10 Liberty. In a two-game series on Friday and Saturday, the Wildcats head to Tempe to take on No. 1 Arizona State (25-6-3), who the Cats have not beaten in the last 28 matchups between the two teams.

Arizona State is led by junior Colin Hekle, who has 53 points (eighth in the nation) in just 34 games played this year. Others on the Sun Devil front lines to keep an eye on are former Minot State player Kale Dolinski, Phoenix native Danny McAuliffe, Stephen Collins, Brian McGinty, and Dan Sytrna, all of whom have at least 34 points on the year. In net, Joe D'Elia sees almost all the playing time, and is leading the Devils to their best year in school history.

The Wildcats are led by the line of Ansel Ivens-Anderson, Brian Slugocki and Andrew Murmes, who are the only Wildcats to register more than 15 points this year, and those three have at least 43 each. Steven Sisler gets the majority of playing time, but don't be surprised to see Robert Schultz get in the game if ASU gets out to an early lead. The Ivens-Anderson, Slugocki, Murmes line is vital to the Wildcats' success. If coach Sean Hogan can get them out there with a favorable line matchup against ASU, look for them to be putting a bunch of pucks on net.

Arizona almost needs a win in Tempe to put itself in the tournament, as it travels to No. 4 Minot State next weekend as part of a three-game road trip to North Dakota before the final poll is released. Sounds like a great time to get that win that over the school up north that has eluded them for so long. 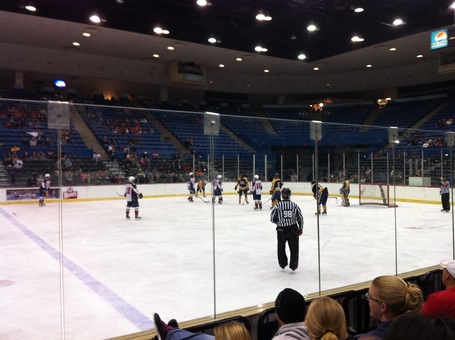