The new football facility is pretty incredible on the inside and outside, and will surely help move Arizona up on the pecking order of college football

I went on a tour led by Arizona A.D. Greg Byrne of the new home of Arizona Wildcats football, the Lowell-Stevens Football Facility. Here, I'll break down some of the highlights of LSFF. We also have a photo gallery from the tour. 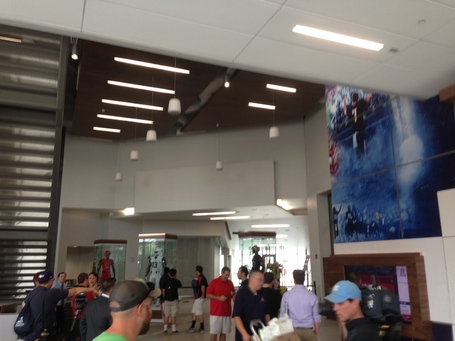 The main lobby is located on the ground level of the Northeast corner of the stadium right next to the Zonazoo entrance. Right outside the lobby is Gate 2, which is the new Zonazoo entry, right on Cherry Ave. Featured in the lobby right now are mannequins with various uniform combos, some enormous images on the walls, and a couple of touch screens which contain tons of information on the history of Arizona football. Also something that is currently still being built is the "Arizona Experience Room", where recruits will be taken to give them an idea of the culture of the area, and things they can look forward to seeing in Tucson.

Greg Byrne said that "We're not going to open the Zonazoo until the end of the Wildcat Walk, so we want more Zonazoo right here at the end of it. The goal is hopefully to make it a better, stronger presence of Zonazoo, presence of all our fans that are there and have them at Wildcat Walk every single week." 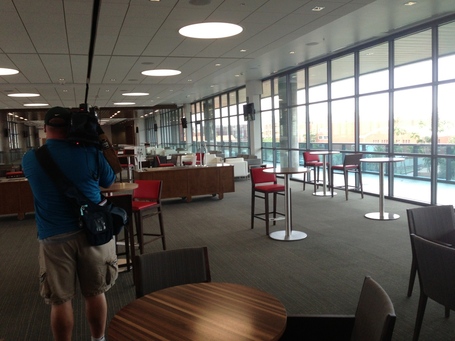 "When people came up here, their eyes were just wide," said Byrne. "There's amenities like this in the Cardinals' stadium, but I don't think there's anyplace else in the state that our fans have seen this."

It is pretty impressive. Looks like there is a full bar area, along with tons of seating in the common area, as well as the actual seating area that is outside the glass windows. Here's a picture of what the field looks like from the club boxes, which will also have a high-def TV for each four-person box. 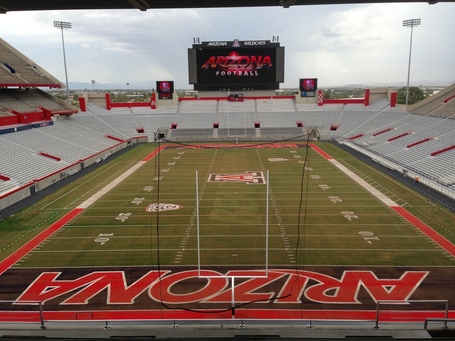 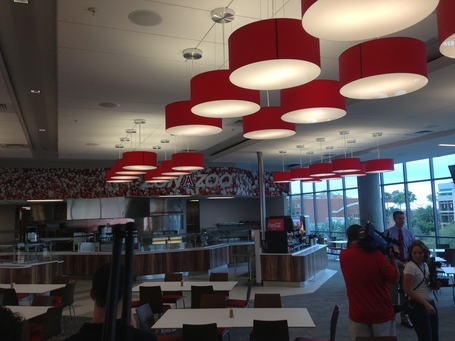 This was one of the more interesting tidbits from the tour. On the main concourse level of the North End Zone is Bear Down Kitchen, which will apparently be open Monday-Friday for breakfast and lunch to the general public, as well as being the main eating place for all Arizona student athletes.

"That makes a big difference for when moms, dads, aunts, uncles, grandmas, whoever comes in and they see a place that they know....that their son or daughter will be well nourished all the time."

Bear Down Kitchen will be used as another recruiting tool for just that reason, that family members will be able to spend time with their kids right there in the stadium. Seems like it's sort of like Cactus Grill in the main Student Union. It also has a great view of Bear Down Field, the Main Library, and the Catalinas. 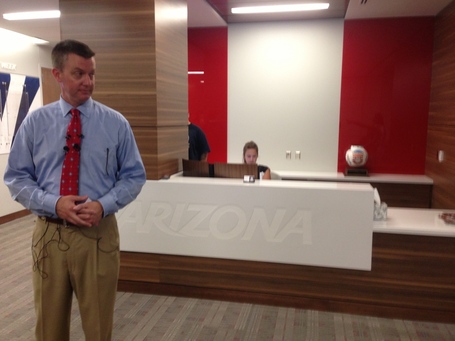 The main offices are very central, located a floor below the main concourse. RichRod's office was still under a bit of construction and decorating, but the hallways have a lot of pictures and images up already, including a wall of family pictures of the entire coaching staff. As you can see in the picture above too, the New Mexico Bowl trophy is hanging out behind the receptionist desk. 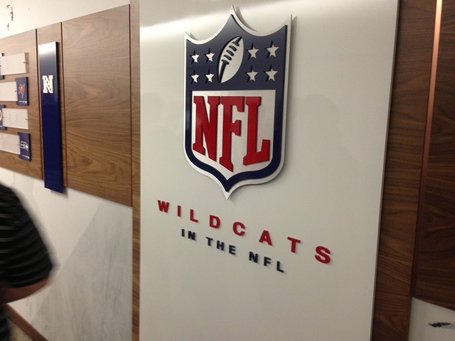 In what seems to be a common them among football facilities, Arizona also has a wall of all the current and former NFL players that are Arizona alumni. Here's a look at the AFC board: 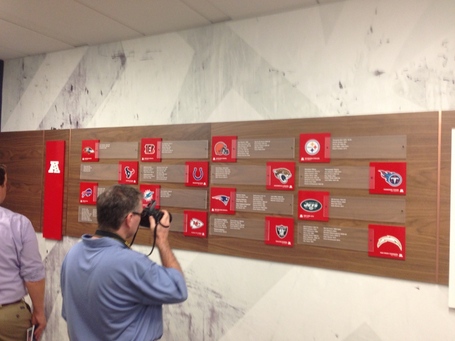 And the NFC Board: 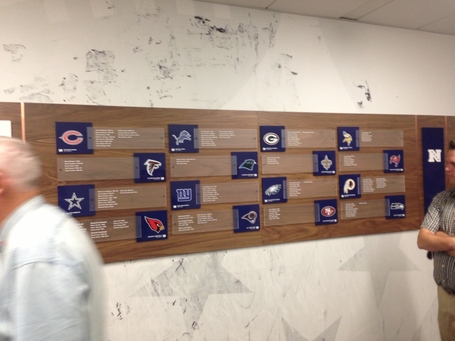 And pictures of former Wildcats that are currently on NFL rosters: 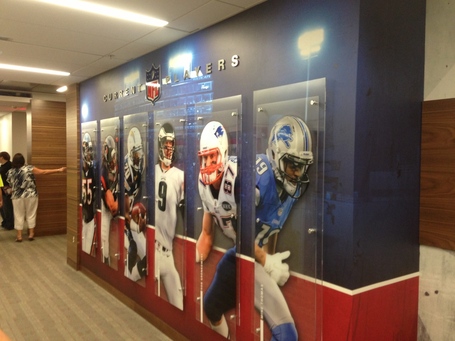 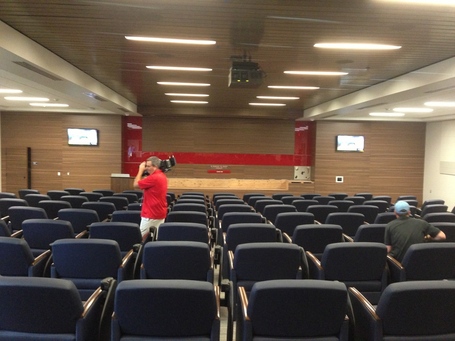 The new team meeting area is super fancy as well. The highlight for Greg Byrne? The Block A logos on the seats: 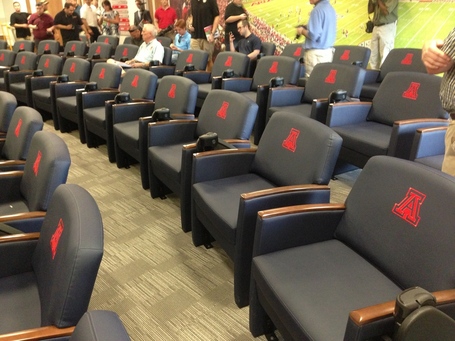 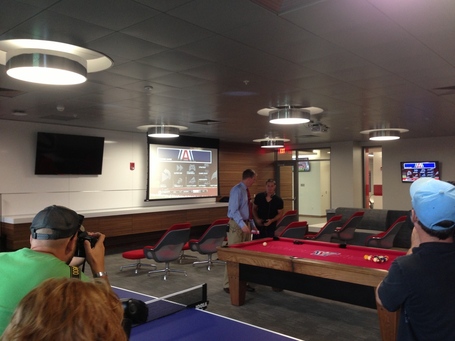 While on the tour, CB Shane Wilson happened to be hanging out playing EA NCAA Football '14 (obviously as UA vs. ASU in Arizona Stadium). He shared how much he loves the new place, and what a big step up it is for the program, and how much fun it is for the players to have all of this space for themselves.

Once again though, Greg Byrne had a favorite part. This time it was the ghost-lettered BearDown on the pool table 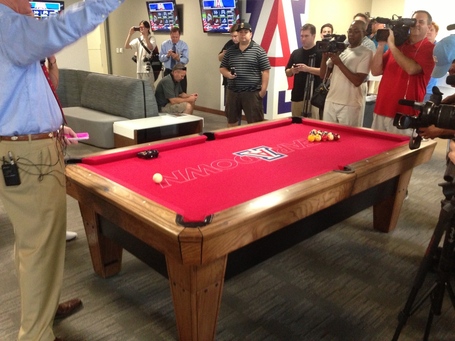 There's also pop-a-shot in there as well as some recliners, couches, loungers, and images of the stadium, which we found out can be replaced to give the building a fresh look every so often. 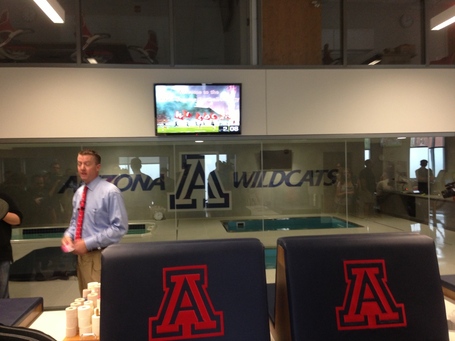 Here is the hot tub/cold tub and aquatic treadmill area of the new medical facility. This part was the very first part built in the LSFF, and the rest went up around it. No waterfalls like Alabama's crazy hydrotherapy castle thing, but still a huge step up from what Arizona has had before. 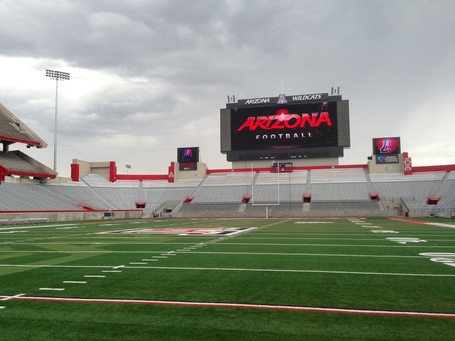 Of course the most visual improvement to Arizona Stadium for the general public is the field itself. It's called Field Turf Cool Play, which has a lot of cork in addition to the rubber foundation. The cork keeps it cooler and faster, and allows the program to use the stadium year-round as there's never a need to regrow grass, and the surface itself stays cool in the hot Arizona sun. Bear Down Field is also artificial turf now, which will make it much easier to ensure intramural programs can use the field on a year-round basis as well. 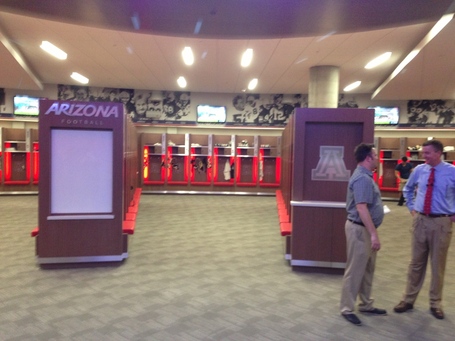 Byrne admitted that they used to not take recruits into the old locker room. Not the case anymore.

It's set up so that RichRod can stand in front of the locker room, and everyone can see him from their locker. A couple of other features include a huge Block A on the ceiling, and a Ring of Honor along the back wall 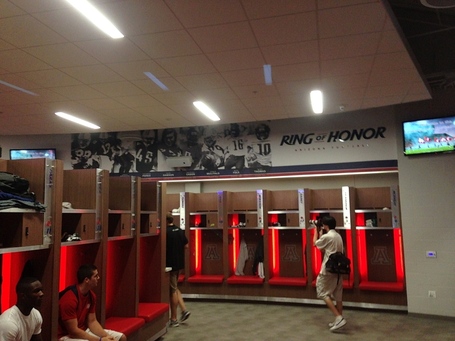 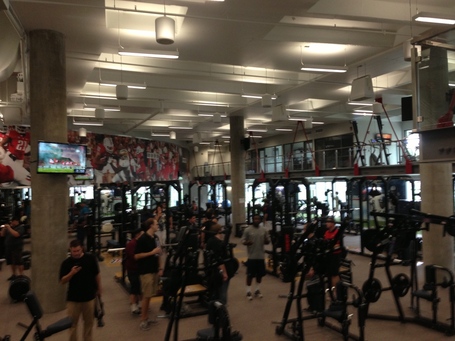 Last but not least was the weight room / fitness center. State-of-the-Art equipment everywhere, a warm up track, and a nutrition bar. A bunch of guys were in there using the new electronic weight lifting equipment, including LB Jake Fischer. A huge mural on the wall adds a nice touch as well.

This is going to be huge for recruiting, and I think that's already shown itself by landing five new commitments in the first week of the facility being open. Everything looks very impressive. I wouldn't put it on the level of what I've seen from Alabama and Oregon, who also recently unveiled their new football facilities, but LSFF is pretty close.

But it's not just improvements for players. Fans will get a much-needed boost to the Arizona Stadium experience. The new north concourse is connected to the rest of the stadium, so everyone will get the opportunity to use the new bathrooms, stand in line at the new concession stands, and enjoy the view of the video board from the north concourse.

Just a fantastic upgrade for Arizona Athletics as a whole, not just football.