The Wildcats start this year pretty much right where they finished last year, just outside the top 16

Today, the ACHA released its preseason rankings.  Defending champ Minot State enters the 2013-14 season as the No. 1 team in the country.  Arizona?  Well, they're 19th.  Also, they have been picked to finish fourth in the newly formed WCHL, behind Arizona State, Oklahoma and Central Oklahoma.

Here's a look at the full rankings: 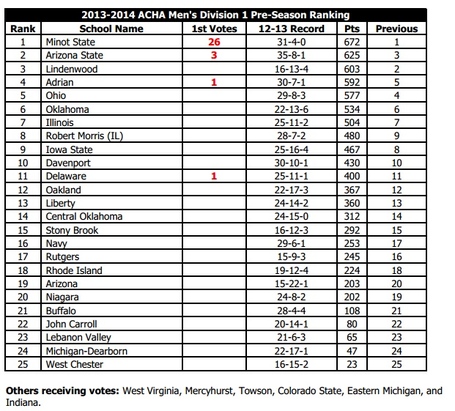 The Wildcats will face plenty of teams that are in the preseason top 25 this year.  Here's a rundown of when they face some of the top teams in the country.

In Tucson November 8th and 9th, at Minot February 14th and 15th

In Tucson November 22nd and 23rd

The Wildcats' postseason fate this year is definitely in their own hands.  25 of their 40 total games are against the preseason top 14.  Pretty exciting that all these good teams come to Tucson at some point this year.

You can find the entire hockey schedule here.  The Wildcats start the 2013-14 season Friday, September 27th at NAU.