Arizona vs. UNLV: First look at the Wildcats' next opponent, the UNLV Rebels

The Cats head to Sin City this weekend

Share All sharing options for: Arizona vs. UNLV: First look at the Wildcats' next opponent, the UNLV Rebels

After a nice 35-0 victory on Friday night at Arizona Stadium, the Arizona Wildcats are headed on the road for the first time in 2013.

The opponent?  The UNLV Rebels. Here are some basics on the Mountain West foe.

If you look at just the basic stats, you would probably guess that UNLV actually won the game 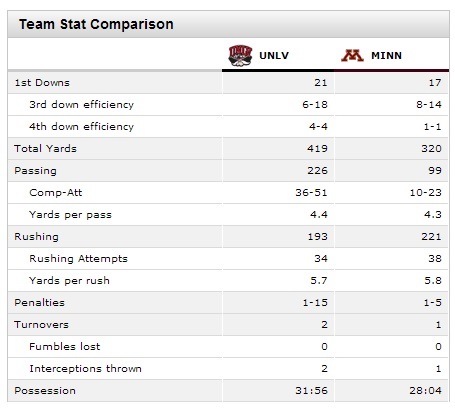 But alas, they did not.  In fact, they got smoked.  Why?  Minnesota's Marcus Jones had a 98-yard kick return for a TD.  Martez Shabazz had a 51 yard TD return on a blocked FG.  And Briean Boddy-Calhoun had an 89 yard interception return to the house.

Going to be up front, here, I did not watch the UNLV/Minnesota game last Thursday.  But judging on the play-by-play and some comments from Arizona players and coaches early on this week, their offense is somewhat similar to the Wildcats.

They did throw a lot, but they were trailing the entire second half.  Sophomore QB Nick Sherry went 35-for-50 for 226 yards.  That's just 4.52 yards per attempt.  Sound familiar?  B.J. Denker had an average of 6.69 yards per attempt against NAU.

Obviously, the Rebels' special teams let them down against the Golden Gophers.  Sound familiar?

Anyways, as of today (Tuesday), Arizona enters as a ten point favorite.

UNLV went 2-11, 2-6 in the Mountain West.  Their lone wins were against Air Force and the New Mexico Lobos.

They lost at home to NAU a week after taking Minnesota to three OTs.

The Rebels were 88th in the nation in total offense last year, and 98th in total defense.

Bobby Hauck has been the head man at UNLV since 2010.  He has led the Rebels to an overall record of 6-32 during his tenure.

Hauck is not exactly used to losing.  He was the head coach at Montana from 2003-2009, where he was the winningest coach in Big Sky Conference history.  Hauck went 80-17 in his seven years as the head coach of the Griz.  His conference record was 47-6, including going 31-1 in his final four years there in conference play.  31-1!

Montana reached three championship games under Hauck, but never broke through and won a national championship while he was in Missoula.

Sam Boyd Stadium....Wildcat fans will obviously recognize it as the home of the Las Vegas Bowl.

The two teams have only met once before.  Arizona came out on top 38-21 when the Rebels came to Tucson on September 22nd, 2001.  Here's a box score from that game.  Lance Briggs played against apparently totally-unrelated guy Ahmad Briggs.  Two Jasons played QB that day as well, another weird fact that I'm a fan of.

Arizona vs. UNLV preview: The Wildcats' romp of the Rebels is on