The last midweek series is in the books as Arizona took down Air Force by scores of 14-2 and 10-2.

Pretty good week for almost everyone. Some familiar faces will grace Three Up with their presence, and it's a real stretch to get some guys on three down.

Scott is the King of Three Up this season really good. Another ho-hum performance from the sophomore outfielder by going 4-for-6, four walks, five runs, three runs driven in, and a stolen base. It's almost silly how good he's been this season. 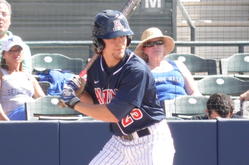 Read more about Kingery's dominance plus other news

Dalbec's really getting it going now, and the timing could not be more perfect with P12 play upon us. 4-for-9 in the two Air Force games, drove in three runs, scored four times, and even stole a base (sort of) on Wednesday. Oh, and he pitched a scoreless ninth inning to seal the sweep. No biggie.

Newman hasn't quite been on the level he was on last year, but he's starting to get it turned around at the plate as well. 4-for-7, three walks, three runs batted in, three runs scored, and more importantly, no errors after a weekend where he had five errors in four games.

Maggi was not at Hi Corbett this week because he's been suspended indefinitely for a violation of team rules. Remember at the beginning of the year when he was going to be the centerfielder and be the leader of the outfield? Cool story.

Maggi's replacement isn't exactly having success either. 1-for-8 with 2 Ks. His at bats are really awful, but the depth at outfield just isn't there. Lopez is just riding this out to hope Meimerstorf starts running into balls and putting them somewhere that they can't be caught. He does hit a ton of long foul balls, but, they are, you know, foul.

To be honest, Ramer's only on here because it was tough to find three people that didn't have a good series. Sure, he went 1-for-8, but still walked twice and scored two times. Just goes to show how good everyone else was.

Arizona baseball: Three up, three down: The best and worst from each series this season