Todd Graham has ASU rolling ahead of schedule. What factors have helped his progress?

Share All sharing options for: Why Has Todd Graham Outperformed Rich Rodriguez?

During his two year tenure at Arizona State, Todd Graham has outperformed Rich Rodriguez. This is a difficult fact for Arizona fans to swallow.

It was a short while ago, after all, when we were mocking Graham's Britney Spears headset, "dream job" comments, and his Kiffin-like teandancy to leave his prior coaching responsibilities at the drop of a hat. These jests have stopped. It's not fun to taunt when you are losing. In two years, Graham has piled up 18 wins, two Territorial cup victories, and a Pac-12 South title.

The Sun Devils have a clear identity, star power, and, most importantly, they have seen success of the field. In Tucson, Rich Rodriguez has been building a similar identity for his Arizona squad. At times, particularly in 2012, ASU and Arizona looked like mirror images of each other. Both ended the year with an 8-5 record, ran an exciting offense, and had significant holes on defense.

Then, while Arizona continued to rebuild, Todd Graham won the Pac-12 South. How did he make the leap faster? Two factors play an important role: 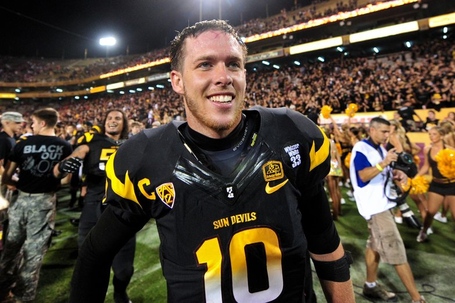 ASU quarterback Taylor Kelly was a godsend but credit Graham for identifying underappreciated talent. Once buried on the bench under a more traditional Dennis Erickson offense, Kelly jumped from third on the depth chart to the undisputed starter in a new up-tempo offense.

In 2013 Kelly cranked out 4,200 yards of total offense, accounted for 38 touchdowns, and only turned the ball over 12 times -- all while working behind the one of worst offensive lines in the Pac-12.

Like his rival at ASU, Rich Rodriguez dug deep into his depth chart to find a starting quarterback. His decision, however, was made out of necessity rather than convenience.

B.J. Denker was one of the most intriguing players to start at Arizona. A scrappy quarterback with a questionable arm, Denker likely played one or two conferences above his talent level while managing to win eight games in 2013.

Any Arizona fan will tell you Denker's success (3,400 total yards, 29 touchdowns, 7 interceptions) didn't match the quality of play on the field. To be frank, most fans would have counted their blessings had Rodriguez nixed the passing game altogether.

Denker's tenure legacy will be one of inconstantly awesome chaos. I hope most Arizona fans appreciated the hard work B.J. put in to keep Arizona successful. Now, it is up to Rodriguez to recruit an elite quarterback who can raise Arizona to the next level. 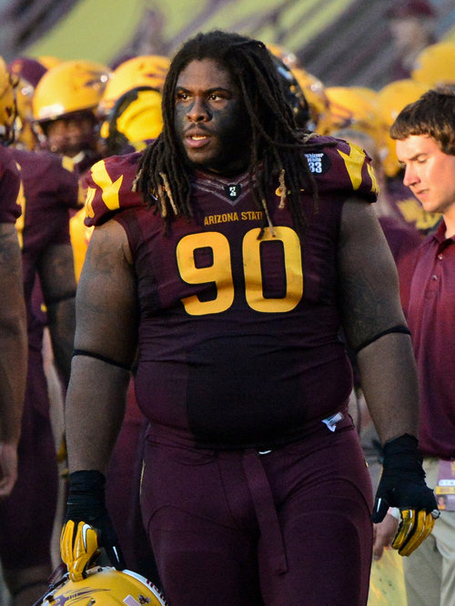 It cannot be overstated how important a pass rush is to a defense and how difficult it has been to find one in Tucson.

A good defensive line can force an offense to be one-dimensional. It can cause a quarterback to make stupid decisions, and takes pressure off of a secondary.

In Tucson, Mike Stoops's failure to recruit a pass rush after the departures of Brooks Reed and Ricky Elmore is the largest knock on his tenure. Between the 2007-2009 recruiting classes, only TWO of TWELVE defensive line commitments played productive minutes. This has killed Arizona's defense under Rodriguez. The ten commits Stoops whiffed on should have been the senior leaders in 2012 and 2013; they were nowhere to be found. The Wildcats have had ZERO pass rush, leaving Arizona's five defensive backs scrambling to stay with opposing wide receivers.

ASU, on the other hand has excelled in the trenches. The last two years, Tempe has been home to three of the top ten defensive linemen in the Pac-12. Two-time All American tackle Will Sutton, Carl Bradford, and Davon Coleman combined for a total of 219 tackles for a loss under Graham. Second only to Stanford in the Pac-12.

The productivity along the defensive line took tremendous pressure off the rest of the ASU defense and allowed for a more aggressive system. Carl Bradford's four sacks in last year's Duel in the Desert is an unfriendly reminder that ASU's frontline played huge role in their success.

Football fans in Arizona should have a number of years to watch the Graham/Rodriguez rivalry grow. Both are talented coaches in one of the strongest conferences in the country.

A key sign of a leader is the ability to make the best out of the situation one has been given. Both coaches have passed this test. Now, the question is how effectively each coach can build his own program. Todd Graham took a talented Arizona State roster and elevated their play. Can he bring new elite talent to Tempe?

Rodriguez took over an Arizona squad with significant holes. Arizona's biggest weaknesses have yet to see major improvement. Can RichRod recruit defensive linemen to a 3-3-5 defense? Can he recruit an elite quarterback?

Sometimes credit should be given when credit is due. Todd Graham was a great hire. The Sun Devils have had Arizona's number for the last two years and will remain competitive in the Pac-12. Well done. Now please find a basketball coach.

Wildcat Radio is a weekly Podcast covering Arizona Basketball and Football. All three hosts majored in Sean Miller and Thursday Drink Specials. You can subscribe to Wildcat Radio on iTunes or Stitcher