UNLV vs. Arizona game chat: Join us for the season opener

Drink beers and type on your computer with us for FOOTBALL.

Share All sharing options for: UNLV vs. Arizona game chat: Join us for the season opener 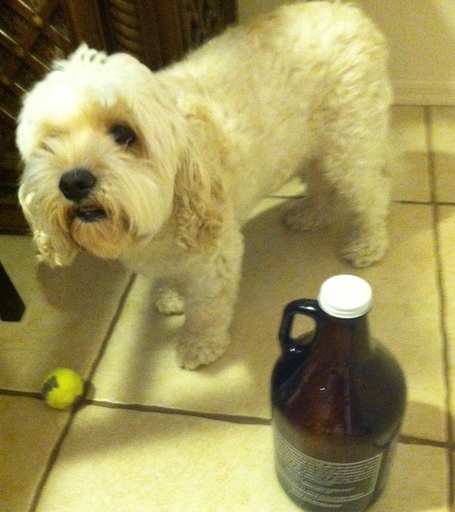 Football makes me want to drink beer. I will do so after writing something about this game. But before each game, I'm going to suggest a beer I think you should try. An idea completely stolen from the swell dudes at CougCenter, I will pair each football game with a beer with a cute dog (only so many cute dogs available, however). Because football, beer and dogs are pretty American.

This is Rupert, my roommate's dog, next to a really sweet ball and a growler of a Huss pale ale. The beer is your classic American pale ale, crisp and refreshing for it being 105 outside. My super mature palate tells you it's solid stuff. Warning: My super mature palate used be down with Beer 30 and Milwaukee's Best Ice, so take this for what it's worth.

Huss is interestingly enough located in Tempe (though it's right across the street from Guadalupe, Ariz.). I know. That's like Sun Devil country. I live in Chandler, and so I don't really get that picky about where my beer comes from. Anyway, Huss is worth hitting up if you're in the Phoenix area.

My challenge: Being forced to try new beers each week. Your challenge: telling me my tastes suck, or just talking about football.

Back to the game. Jason Bartel will check in with insight from Arizona Stadium. I'll be watching from a couch in Chandler. Drop in. Ask us questions. Tell us your thoughts. A lot of things to watch in this first game. You'd think there's not much of a shot the Wildcats will Coug this up, but anything's possible after watching the Cougs Coug things up yesterday.

As always, thanks for reading. A little nervous about the post-Ka'Deem era. Also for the post-B.J. Denker era, and who would've guessed we could say that 365 days ago?