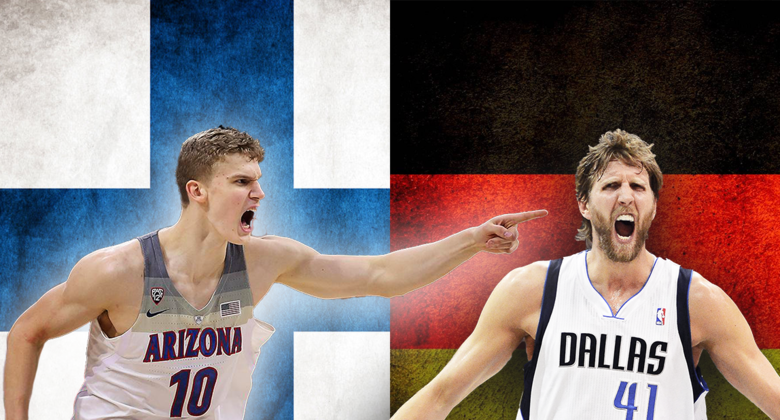 Lauri Markkane, the 7-foot, sweet shooting PF from the Arizona Wildcats is already drawing comparisons to future NBA Hall of Famer, Dirk Nowitzki. Standing 7 feet tall and weighing 225 pounds, Markkanen is virtually the same height and weight as Nowitzki, who is 7 feet tall and 245 pounds. After just one year at the University of Arizona, the Finnish sharpshooter averaged 16 points a game while shooting 49% from the field and 42% from the three point line, while also leading the Wildcats to a sweet 16 berth before they eventually lost to Xavier.

Already being pegged as the "best shooter" in the NBA draft this year, it's hard to overlook him as potentially one of the best prospects in the 2017 draft class. In fact, his one year at Arizona already has NBA scouts drooling over his potential. In the Pac-12 Tournament he had a huge game against rival UCLA, in which he finished with 29 points and 6 rebounds. A week later he followed that up with another 20 point game, and shot a terrific 8-for-12 from the field.

With each year that passes by, NBA teams are starting to value the three point shot more and more, which making him virtually a valuable player for any u he gets drafted too. His height means he will be able to play as either a stretch four or even at the center position in the NBA, and create an instant matchup problem for nearly any center who has to guard him.

With the draft only a month away he is projected as a top ten pick in nearly every mock draft. With the Dallas Mavericks sitting at the number nine spot in the draft, Lauri is their number one option if he is still available. If Lauri is indeed drafted by the Mavericks, he would not only be able to get playing time instantly, but learn from one of the greatest shooting PFs ever, Dirk Nowitzki.

He would be able to learn from a future Hall of Famer, and won't be tasked with taking over the starting role immediately, which has hurt so many prospects who has only spend one year in college. Lauri will be able to learn the NBA game from a true professional, and in a year or two be able to hopefully become that franchise player that Dirk was to the Mavericks for so many years.

All comments, fanposts, and fanshots are the views of the reader-authors who create them.