Getting to know Kent State Baseball with Hustle Belt

Share All sharing options for: Getting to know Kent State Baseball with Hustle Belt

The Arizona Wildcats open their 2014 baseball campaign against Kent State this weekend. I know nothing about Kent State, so I figured I would ask someone who knows them to get an idea of this team.

Alex Alvarado from MAC blog Hustle Belt took some time to answer some questions to get Arizona fans introduced to this team.

1. Kent State was in the 2012 CWS when Arizona brought home the National Championship. Are any of the key pieces from that team still around? And how great was that run for MAC fans, and in particular Kent State fans?

I can't say that I've been a Kent State fan, but when a MAC team makes a run like that, I couldn't help but to root for Jimmy Rider and the rest of the Golden Flashes that year.
Notables from that 2012 roster: Brian Clark, Eric Dorsch, T.J. Sutton, and Sawyer Polen.

College baseball is all sorts of weird. Anything I say is going to just be optimistic speculation, but one thing I can say for certain is that Mike Birkbeck knows what he's doing with his pitchers. This is his 18th year as their pitching coach after spending 14 years playing professionally. If he's going to put Clark as the Friday guy over Eric Lauer, there's probably a very good reason for it.

Jeff Duncan, the new head hancho for KSU says he's a power guy. I mean, that makes sense, right? Most back-ended pitchers are power arms, and Clark hits 95 on the gun. 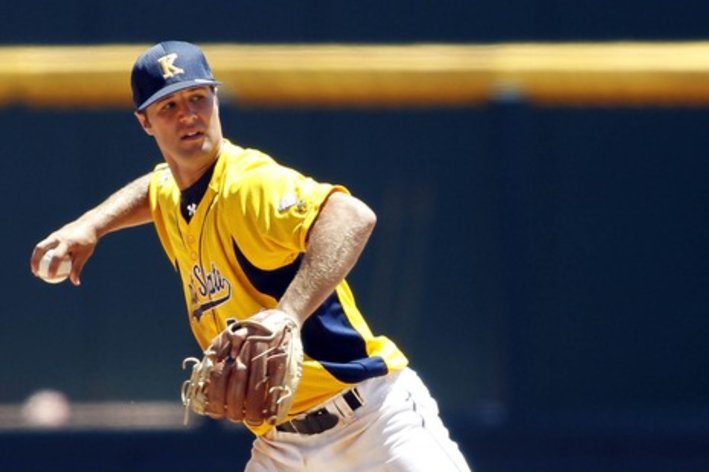 4. Alex Miklos and Sawyer Polen appear to be the two guys in the lineup to watch out for, but is there a sleeper out there that could really make an impact this weekend?

Zarley Zalewski. I know, sweet name, right? Zalewski appeared in only 39 games last season as a true freshman, but is expected to play more this year. He was also selected in the 40th round of the MLB First Year Draft by the Pirates in 2012.

I'd put my money on Eric Dorsch, who had 31 strikeouts in 19 appearances last year. But even Jordan Foley, Central Michigan's ace, started off as a reliever his freshman year, so it wouldn't surprise me to see Andy Ravel come in to pitch in the later-innings, either. Ravel was drafted in the 21st round this past June by the Diamondbacks. That kid was an All-American last year in high school, too.

6. Baseball America has Central Michigan as the team to beat in the MAC even though they went 12-15 in conference last year. What's up with that?

I had the same reaction, until I really looked at it. They've got some serious depth this year. Jordan Foley is someone that scouts love, and the two Regnier brothers are also in BA's list of top 10 prospects in the conference. I'm sure they weren't trying to diss Kent State, but just to really praise the depth they have this year.

7. Do you consider Kent State as one of the top-tier teams in the MAC still even after head coach Scott Stricklin left to take the Georgia job?

Without question, yes. The talent, the coaching staff around them, the resources, the recruiting, everything. They don't win conference championships year after year because everybody else in the MAC is bad, but they've always had this history of grooming good talent. And even after they lose a few guys to the Draft, they always find ways to sustain success.

8. It's going to be in the 80s all weekend in Tucson. You want to be out here instead of in Michigan, right?

ABSOLUTELY! I've had four snow/cold days so far this semester, which is cool and all until you have to go to the grocery store and it's too cold for your engine to run, or spinning out of control on the highway and landing in a ditch (true story). This polar vortex has been unreal.

Thanks again to Alex and make sure to check out Hustle Belt for all your #MACtion needs!