Today, Baseball America released its top prospects, and three Wildcats are in the Top 100 for their respective college classes.

James Farris, who returns after being drafted in the 15th round last year by the Houston Astros, is rated 14th overall in the senior class. Farris is the new leader of the pitching staff in Tucson, and is still looking to build upon the great postseason he had during the 2012 National Championship run. 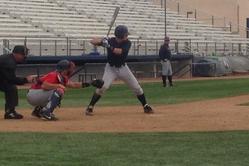 Look for Kevin Newman to do big things this season

Kevin Newman checks in as the 27th best prospect in the sophomore class. I'm shocked this is so low based on what he was able to do last year, and the summer he had. Expect the shortstop to be hitting second in the lineup, setting the table for some guys including the third Wildcat that was honored today.

Freshman Bobby Dalbec was ranked 43rd overall in the freshman class. Dalbec will likely be the starting third baseman for Arizona, and be right in the middle of the lineup, just like Brandon Dixon was last year. Last year, Dalbec played high school ball in Parker, CO, and the Denver Post named him to the All-Colorado baseball team.

Baseball is less than two weeks away people!