Not surprisingly, Arizona baseball commits Cole Tucker and Michael Kopech have both signed contracts with the teams that drafted them in the first round of this year's MLB Draft.

Tucker, the 24th overall selection by the Pittsburgh Pirates, signed his deal and received a $1.8M signing bonus according to Baseball America. Kopech, who was the 33rd overall pick by the Boston Red Sox, does not have his terms disclosed yet, but it appears he signed for under slot value.

Source: Michael Kopech's deal with #RedSox is around $1.6M, under the $1.678M bonus figure. @alexspeier said it was under slot.

When Tucker was drafted so high, all thoughts of him coming to Tucson went right out the window. He was expected to be drafted somewhere in the second or third round, so you can understand why it was a no-brainer for the kid from Mountain Pointe HS in Phoenix to sign now rather than risk it by coming to UA.

Kopech, on the other hand, appeared to be more up in the air based on how he slid slightly down draft boards compared to where he started the season. While it has been widely reported that his fastball has not improved from the low-to-mid-90s that he's been at for a couple of years now, I did receive this tweet about possible misreportings.

@jasonbartel Good article, but misinformation from BA @ his FB probably costs him a few spots in draft: consistently hit 98,& 99 at least 1x

While I'm sure Kopech has probably hit 98 on the gun before, I'm not sure how it's possible to consistently hit 98 and only hit 99 once.

Even if Kopech did slide, the difference between 24th and 33rd is about $200K, and the 31st overall pick, Justus Sheffield, has also signed a $1.6M signing bonus already. So, definitely worth it to take the money while he can.

The decision by Lopez and the coaching staff to recruit players that seemingly would have never come to play in Tucson is questionable, no doubt. But there are 17 players that are currently in this recruiting class, and there are four more of them that were drafted, three in the 22nd round or later.

Where all Arizona players were drafted 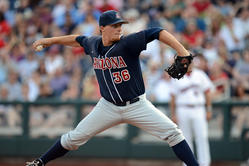 Listing where each Wildcat player and commit was picked

Four schools had two commits drafted in the first round (UA, UNC, Vanderbilt and Oregon) of this year's draft. Personally, I like having Arizona in that group, and Lopez going after the best possible players. Take Kopech for example. It was between Texas and Arizona for him when choosing colleges. Where's Texas this year? Omaha. Where's Vanderbilt? Omaha. Where were UNC and Oregon? The tournament.

You can question what the decision-making process is for recruiting the high-end recruits that end up signing straight out of high school. But wouldn't you rather the program goes after the top players possible and fight to get them to come to school rather than going after guys that have no shot at getting drafted?

This new age of technology has made it virtually impossible for college coaches to try and sneak a kid by pro scouts. There's so much video, so much information, so much everything that it's unfair to expect a team to haul in a top-end prospect that hasn't been seen by each and every MLB team.

Top prospects are still committing to Arizona. Just because they don't show up doesn't reflect poorly on the coaching staff. It reflects on the new age of the MLB Draft and the art form of baseball scouting.

MLB Draft 2014 coverage: Where Arizona Wildcats players and commits are getting picked