Another summer, and another Arizona Wildcats freshman is making waves at the Cape Cod League.

This year, it's Willie Calhoun who has the hot hand.

The freshman infielder leads the Cape Cod League in hits a little under two weeks into the season. Having played in all 12 games for the last-place Wareham Gateman, Calhoun has racked up 17 hits, two clear of second-leading hitter Johnny Sewald from ASU. Of Calhoun's 17 hits, eight have been doubles. The next closest guy has five doubles.

Arizona head coach Andy Lopez has been high on Calhoun's ability to hit the ball since before the 2014 season, but it never really showed. Calhoun ended up hitting just .247 in 46 games played for the Wildcats.

One thing I love about Cape Cod League is their ability to keep track of spray charts. And Calhoun's spray chart is exceptional. 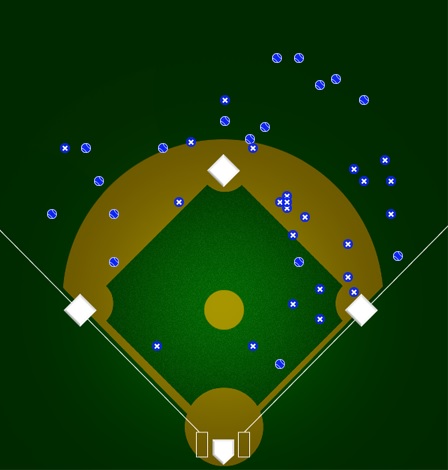 There's a lot of right-center gap shots that would certainly play well in Hi Corbett. It's also good to see that he's at least getting some hits through the opposite side, but there are still a lot of groundballs to second base as well.

Calhoun of course isn't the only Wildcat playing in the Cape Cod League this year. Kevin Newman was there again, but has left to attend Team USA trials.

Scott Kingery is still there, but is scuffling a bit. In eight games played, he's already struck out seven times, and is hitting just .194. Bobby Dalbec is also struggling with the bat, going 3-for-17 with 8 Ks so far.

Dalbec's pitching skills aren't struggling though. In five appearances, he's thrown 3 1/3 scoreless innings and struck out five batters. Nathan Bannister is really impressing, having gone eight scoreless innings to log a 2-0 record for the Orleans Firebirds. Just four hits and one walk in those two starts for Bannister, who was messing with his arm slot all year this year. Maybe he's found something in Cape play.

One last Wildcat to check in on is Cody Moffett. He has given up just one hit in 3 1/3 innings, but surrendered three earned runs in his first appearance thanks to a couple of walks and a couple of hit batters.

Calhoun and Bannister's hot starts are definitely encouraging, and it'll be interesting to see if they can keep it going throughout the rest of the summer. If Arizona can get contributions from guys like those next year, look for a huge step forward in the wins column.