A cool look from MiLB.com at how the former Wildcat has changed his game to improve his stock

Share All sharing options for: How Robert Refsnyder has become a top prospect for the New York Yankees

Every year around the trade deadline, MLB.com adjusts their list of top prospects in every organization. One former Arizona Wildcat found themselves in the Top 20 for their club, and that guy is 2012 National Championship hero Robert Refsnyder.

Refsnyder was listed as the No. 6 prospect in the Yankees organization, as well as the No. 10 overall prospect at second base.

Wait a minute, second base? Arizona fans obviously remember Refsnyder patrolling right field just two years ago. So how did he end up at second base? Check out his scouting grades, and they'll give you a little bit of a clue:

Scouting ranks are on a 20-80 scale, so as you can see, he's graded right around average for everything. Fielding and power at 45 are certainly red flags when you're talking about playing outfield in the Big Leagues.

Every week, MiLB.com does an article called "Stock Watch", where they profile a particular player whose stock is up, and this week, that player was Refsnyder.

In it, Jake Seiner does a great job of showing how Refsnyder has transformed his game from last year to this year, and how it has turned him into a highly-rated prospect at second base instead of a corner outfielder that will be lost in the mid-level minor leagues.

One huge thing that has changed in Refsnyder's game is his ability to drive the ball into the outfield, something he was struggling with in 2012 and 2013. Seiner offers up this graphic, comparing where the balls Refsnyder hits actually wind up in the field.

The main takeaway from this graphic is the sudden emergence of power to the left side. a huge thing that was missing in his game.

The right-handed hitter has pummeled the left-center power alley this season. Each of his career-high 13 home runs has gone to left or left-center, and many of his 29 doubles have been driven between left and center, as well.

The addition of power is no accident. The right-handed hitter had his swing overhauled by Double-A hitting coach Marcus Thames, and in this profile from the New York Daily News, Refsnyder also cites getting to watch and talk to none other than Alex Rodriguez while A-Rod was rehabbing in Tampa last year.

"A-Rod was the staple for a righthanded hitter," Refsnyder told John Harper of the Daily News. "You'd go to any batting cage, any guy showing film of hitting, and A-Rod's swing would come up. I got to watch him and talk to him about hitting approach when he was rehabbing in Tampa. Whenever he was in the cage he always had a plan, a purpose. His swing was so short and direct. As a guy whose swing wasn't where I wanted it to be, I took a lot from watching him."

So how did Refsnyder change his approach at the plate? Here's a couple looks at his past batting stance and his current one that Seiner put together. 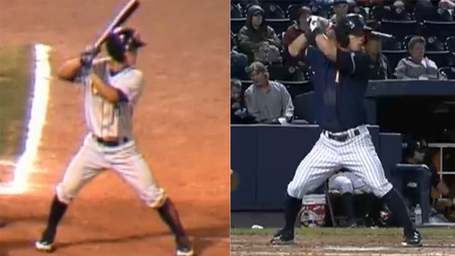 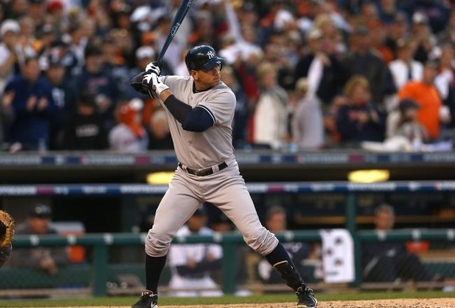 Similar lower half. The bat is in a different position for Refsnyder, but it's obvious that he's found a more powerful way to set up his hips, knees and feet.

Now take a look at Refsnyder's change in leg kick. 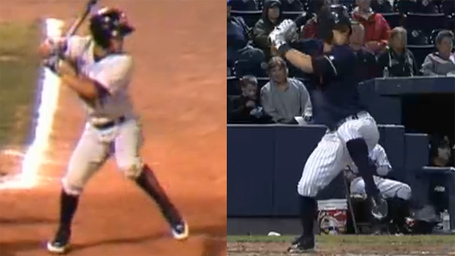 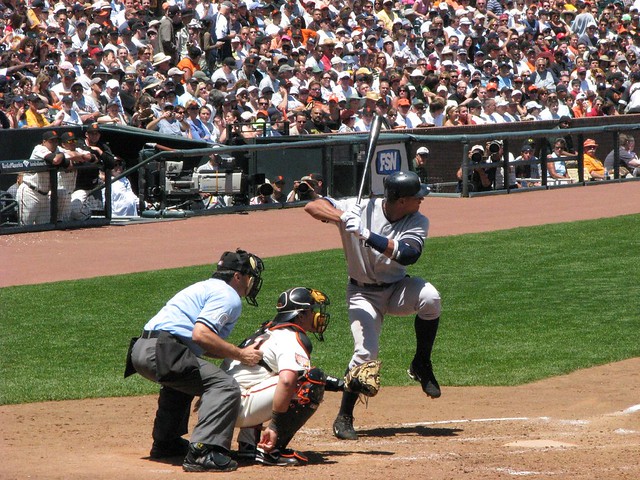 A-Rod's affect here is pretty obvious. No matter what you think of him as a person and a drug-user, there's no denying he knew how to hit a baseball.

That right fielder we saw in 2012 may look a lot different at the plate, and isn't actually playing outfield anymore, but Rob Refsnyder is on the verge of being the first player from that team to play at the big league level because of these adjustments.