A Look back at the 2012 National Champion Arizona Wildcats Baseball team.

The 2013 season is just around the corner, so let's take a second to remember the ecstasy that was the 2012 season

Share All sharing options for: A Look back at the 2012 National Champion Arizona Wildcats Baseball team.

The Arizona BatCats start the 2013 season this Friday against Coppin State. So let's take a second to remember the 2012 National Championship season.

Entering the 2012 season, Florida, South Carolina, and Stanford were the picks among experts to be taking home the hardware from Omaha. Arizona entered the season in the middle of most polls, as the pitching staff depth was the biggest question for the team. Kurt Heyer was entering his junior year, and his third straight year of being the go-to guy on Friday nights. Behind him though were a lot of unknowns. Would Konner Wade emerge as a great No. 2 guy? Who would even be the Sunday starter? And what about the bullpen? The bullpen had been the weakest part of the team for years.

On the offensive side, the Cats were stacked. The only question in the field was the right side of the infield. Who would play first and second? And would they succeed? OFs Johnny Field, Joey Rickard and Robert Refsnyder, 3B Seth Mejias-Brean, and SS Alex Mejia were all coming back from the year before. And freshman catcher Riley Moore was ready to show he belonged.

One of the biggest changes for Arizona entering the year? 2012 was their first year playing in Hi Corbett Field. They left behind Jerry Kindall Field at Frank Sancet Stadium for the legendary off-campus home. Moving into Hi Corbett instantly put them in one of the top facilities in the country, and a huge advantage in the conference for getting fans out to games. 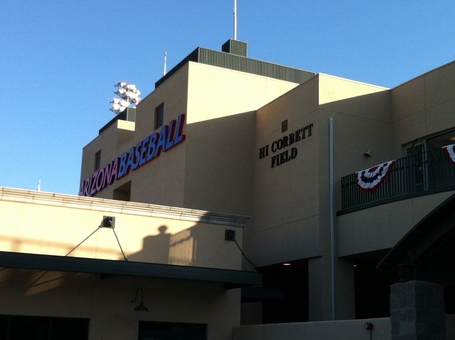 All of this played out through the regular season, finishing with a share of the Pac-12 title with UCLA after taking 2 of 3 from Arizona State in the final weekend, and a No. 1 seed in the regional round of the NCAA tournament. The offense dominated the rest of the conference, finishing with an overall batting average of .329! The next highest? UCLA at .304. The pitching was inconsistent at times, especially from the bullpen. The Cats finished seventh in the conference in ERA.

In the Regional round, Arizona hosted Missouri, Louisville and New Mexico State in a double elimination tournament, and dominated the group, winning their three games by a combined score of 47-10. This domination combined with North Carolina getting eliminated in their regional gave Arizona yet another set of home games the following weekend.

St. John's came out to Tucson from New York for the Super Regional, and gave the Wildcats a tough time. In Game 1, St. John's took an early 5-0 lead, before Zona came back to win 7-6. Game 2 saw the Wildcats take down the Red Storm 7-4, and punch their ticket for Omaha, now a perfect 5-0 in the tournament.

The Cats' first game in Omaha was against Florida State, and it was a thriller! In the 12th inning, Arizona managed to plate a run in the top of the inning, with Matthew Troupe finishing out the win over the Seminoles. Game 2 was against UCLA, and Konner Wade shut down the Bruin bats. He gave up just 5 hits in a 4-0 shutout, sending Arizona to a rematch with FSU, which they won easily, 10-3. The defending National Champion South Carolina Gamecocks swept through their half of the bracket as well, and the Championship Series was set.

Arizona had no intention of letting South Carolina repeat though. Even without using Kurt Heyer at all in the final series, the Cats won the games 5-1 and 4-1 behind Konner Wade and James Farris respectively. National Champions! Arizona became just the second team ever to go 10-0 in the NCAA tournament, with the only other team being the 2011 South Carolina team.

The aftermath in Tucson was awesome! A celebration in McKale Center, being honored at a Diamondbacks game, and a trip to a Tucson Padres game, which gave us this fantastic video of Kurt Heyer dominating a bouncy horse race

Friday begins the quest to repeat as National Champions. The losses of over half the lineup and the pitching staff's ace will surely be a huge obstacle to overcome, but there is no doubting the will to win on this team.