The San Diego State and Arizona matchups of late have spelled out a new basketball rivalry.

What makes a great rivalry?

Sometimes it takes a little more than regional similarities or tradition to make rivalries.

Regionally, there aren't many other West Coast schools with an emphasis on basketball. UCLA is stuck living in the John Wooden days -- for some reason they forgot that Ben Howland wasn't so bad -- and Washington is on a downturn. The Huskies have been a power under Lorenzo Romar, but it seems a little forced. The Gonzaga Bulldogs haven't played the Wildcats in a while, and even then you get the feeling last year's hype around a top-seeded team was for no other reason than media bandwagon building.

But ask Sean Miller who's a West Coast power, and he goes to Steve Fisher's program.

Who are the Aztecs? 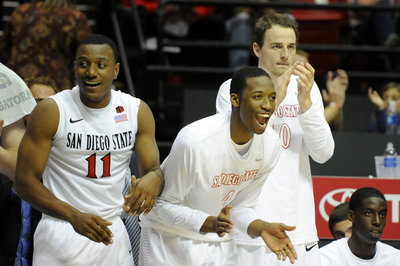 Jeremy Mauss of MWC Connection talks with us about SDSU

Go back to 2011. When the Wildcats visited Anaheim, Calif., in the Elite Eight, they beat Duke in the first set of games for the weekend, but they shared the Honda Center with San Diego State. I remember arriving from the long drive from Tucson at halftime of the Aztecs' game against the UConn Huskies, the team that the Wildcats would face two days later. It was red. Very red. It was also loud.

The arena emptied a bit after the Aztecs fell to the Huskies, but it filled back up quickly with another shade of red. Arizona beat Duke, but it's a wonder how different the atmosphere would've been in the Elite Eight game had the Aztecs handled UConn as well. It would have only added to what's already a long series between UA and SDSU.

The Wildcats lost to San Diego State 61-57 in McKale Center in November of 2011, the first time in more than 21 months Miller's team fell at home. Kawhi Leonard and Derrick Williams squared off in a 2009 loss for UA, and Jordan Hill went for 25 points, 14 rebounds and six blocks a year before. With the exception of a break in 2010, the recent series goes back to 2006, when one of the Wildcats most darkly-cited players, Marcus Williams, scored 21 points to go with 16 rebounds.

It's not gotten the attention it should, maybe, but the San Diego State and Arizona rivalry is in the process of turning into something more, even if it's unclear when they'll play one another down the road. And both teams are only getting stronger.

Fisher's squad looks a bit different from the last few seasons. Guard Chase Tapley, the man who nearly beat Arizona last year and the one who did just that at McKale two years ago, is gone. So is Jamaal Franklin, who's now playing with the Memphis Grizzlies.

But Tulane transfer Josh Davis will be the biggest threat to the Wildcats' chances. The 6-foot-8, 215 pound swingman averaged 17.6 points and 10.1 rebounds per game for Tulane last season and used the Mark Lyons graduate rule to gain immediate eligibility at SDSU.

For a team like Arizona that makes up for its seeming lack of great three-point shooting with length and athleticism, Davis becomes most valuable by attacking the rim. Last season, he averaged more than eight free throw attempts per game, and in general, that could threaten to put the Wildcats' frontcourt in foul trouble. SDSU doesn't go all that big with their lineups, so Kaleb Tarczewski's speed will again be tested, as will his ability to hold box-outs against more agile players.

When and if the Wildcats get in foul trouble, the depth will be tested -- Zach Peters or Matt Korcheck could get some minutes if it goes poorly.

Otherwise, Aaron Gordon might see a good number of minutes at the power forward spot as the Wildcats go small.

The question of the day

Can Brandon Ashley keep up his stellar start to the year?