NCAA basketball rankings: Arizona to No. 5 in AP poll, No. 4 in USA Today Coaches'

The Arizona Wildcats moved up from sixth to fifth in the college basketball poll thanks to Duke's loss to Kansas.

Share All sharing options for: NCAA basketball rankings: Arizona to No. 5 in AP poll, No. 4 in USA Today Coaches'

Sean Miller's team begins its NIT Season Tip-Off run tonight against Fairleigh Dickinson as the tournament favorite, at least as far as the Associated Press pollsters are concerned. The Arizona Wildcats moved from sixth to fifth in the poll after the Duke Blue Devils lost to the Kansas Jayhawks last week. 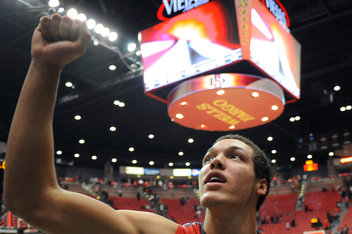 The Michigan State Spartans moved from second to first after defeated previous the No. 1 Kentucky Wildcats. Kansas, Louisville and Kentucky follow and are ranked ahead of Arizona.

Also representing the Pac-12 is Oregon, which comes in at No. 17. The UCLA Bruins are ranked 22nd.

In the USA Today Coaches poll, the Wildcats moved from fifth to fourth place and jumped Kentucky and Duke.

Below is the AP poll followed by the USA Today Coaches poll.