Arizona opens up the NIT Season Tip-Off with a home game against Fairleigh Dickinson.

Share All sharing options for: Arizona vs. Fairleigh Dickinson: Time, TV and preview

This one might test the Arizona Wildcats' maturity, if anything. The NIT Season Tip-Off event begins for Sean Miller's crew Monday night in McKale Center against Fairleigh Dickinson, an already-embattled team with a 1-2 record and blowout losses to Hofstra and Hartford on its resume.

The Northeast Conference club is a heavy underdog, but that only means it's a chance for an inexperienced Arizona team to pounce early.

Coming off a high after beating a competitive San Diego State team on the road, the Wildcats have a chance to prove their focus wasn't a fluke. Against the Aztecs, it was Arizona looking like a veteran ball club, never losing control of a game despite at times losing momentum. Execution marks a well-oiled team, and so far Miller's squad passes the test.

Fairleigh Dickinson does have some size, but it's likely the majority of that won't be part of the starting lineup.

The Knights run out a three-guard attack with Mathias Seilund playing at the power forward position as a 6-foot-7, 205-pound wing. In the middle, FDU will likely start Scooter Gillette, a 6-foot-9, 225-pound forward who is shooting 85.7 percent from the floor through three games but taking just more than two attempt a game. 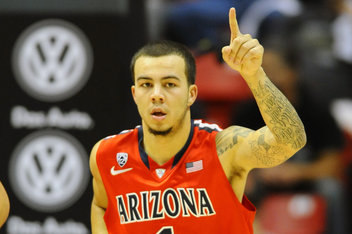 Arizona moves up in both the AP and USA Today Coaches polls.

The shot attempts for the forwards are good news for Arizona, a team that in the past few years has found trouble against perimeter-oriented big men.

And if the FDU bigs are capable of shooting and challenging Kaleb Tarczewski and Brandon Ashley on the perimeter, then they have yet to show it. The guards are doing a poor job of getting them the ball.

Point guard Sidney Sanders Jr. is averaging 12 points and 4.7 assists for the Knights, and he's taking a solid percentage of the shot attempts, or 13 per game. Mustafaa Jones, a 6-foot-3 guard, leads the Knights and averages 12.7 points per game.

There's more size off the bench for Fairleigh Dickinson. Forwards Myles Mann and Xavier Harris each measure in at 6-foot-6, and they bring more beef at 260 and 230 pounds, respectively. Freshman big man Mike Owona brings more length at 6-foot-9 and 245 pounds.

Five-foot-8 point guard Malachi Nix has been the main scorer off the bench.

Still, the issue for FDU will be in trying to get its big men touches. Against T.J. McConnell and Nick Johnson, the FSU guards won't have a night to remember unless they attack the paint. And if the Knights don't challenge the Arizona bigs defensively by setting their own frontcourt players up for success, then the Wildcats will be rolling deep into Miller's bench, which might be a good time to give forward Zach Peters more playing time.

Arizona's game against Fairleigh Dickinson will be preceded by Rhode Island facing Metro State. While Rhode Island is considered a darkhorse that might be a test for the Wildcats should it win, it's not out of the question that Metro State could pull off the upset. The Division II school, formerly coached by one-time Arizona assistant Mike Dunlap, has a rich history.