Duke vs. Arizona: Time, TV and how to stop Jabari Parker

How will the Wildcats handle Duke's ball pressure and super freshman Jabari Parker.

Share All sharing options for: Duke vs. Arizona: Time, TV and how to stop Jabari Parker

Duke and Arizona meet in Madison Square Garden on Friday. So it's probably important.

It often has been whenever the Wildcats and Blue Devils meet. 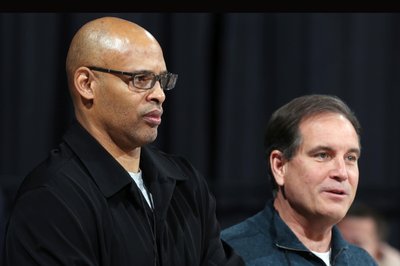 We caught up with Clark Kellogg to talk Arizona hoops and the NIT.

The two top-10 schools square off in the NIT Season Tip-Off Finals in their first meeting since Arizona's 2011 Sweet 16 run, and though the early-season test will be a learning moment rather than a critical must-win, it still holds the usual storylines backed by the traditions of each school. It's coach Mike Krzyzewski against coach Sean Miller, freshman Jabari Parker versus freshman Aaron Gordon, and No. 6 facing No. 4.

Duke has traditionally sought suffocating ball pressure similar to Miller's man-to-man defense. But in the Sweet 16 two years ago, the Wildcats broke down those athletic, talented Blue Devils -- there turned out to be six NBA players on that team.

Fun fact: According to Sports-Reference, the Wildcats are first in the country in allowing opponents to hit 36.1 percent on two-point attempts.

"Duke, in the last few years, hasn't been quite as good defensively as they have been in some of the championship years," CBS Sports analyst Clark Kellogg said last week. "That to me will probably be where I'll put my focus in watching Duke. Are they getting better defensively, especially containing the dribble. Can they do that at a high level?"

This year, Duke has a small team with players capable of putting the pressure on T.J. McConnell and Nick Johnson. But behind them, there's hardly much size. Super freshman Jabari Parker, a 6-foot-8, 235 pound forward, is leading the team with 1.7 blocks per game. Parker has been playing at different spots on the floor, but no matter the case, he's the only worry if Arizona can penetrate past guards Quinn Cook, Rasheed Sulaimon, Andre Dawkins and freshman Matt Jones.

And it'll go the other way for Duke against Arizona, though the biggest worry is Parker and swingman Rodney Hood attacking off the dribble.

How does Arizona stop Jabari Parker?

Parker has been compared to a Carmelo Anthony type scorer. He's an NBA-sized small forward who can play the 4 and 5 in college. For Coach K's offense that in the recent years has pushed the pace, putting Parker at the center spot is more than exceptional, and it could be the biggest issue for Arizona. Simply put, there's no chance the Wildcats can hang with their size if Duke is getting into transition.

That of course means Arizona has to makes shot to keep the tempo in their favor. The biggest issue if that doesn't happen is Parker, who can take the ball the length of the floor off his 8.7 rebounds per game.

"Jabari Parker is a terrific talent," Kellogg said. "This kid can do everything. He's athletic enough to make plays above the rim, he can shoot it, he can put it on the floor, he can pass, he can block shots. When you've got a player like that at that size, the most important thing is you have him on the floor. I don't think you have to worry about what position he's playing."

So who matches up with Parker?

The hype machine would love for Aaron Gordon to get the assignment, and that's possible. It's a wonder, though if Gordon is healthy enough -- he looked fine laterally but wasn't leaping like he can, it seemed -- and a good enough defender in general to cover Parker on the perimeter and in the post. Brandon Ashley could be an option after doing a fine job on Sun Devil Carrick Felix last season, but Parker is a whole other animal.

Rondae Hollis-Jefferson may give up some weight, but he'd be an intriguing option to chase after Parker, who might be the best NCAA freshman so far this season.

Can Arizona play to its identity?

Number four against No. 6 -- the Wildcats kept to their guns against Drexel and continued to feed Kaleb Tarczewski despite his first-half woes. It finally broke the Dragons, and Duke's lack of size could likewise be attacked. Yet, the Blue Devils will counter with a spread court, a fast pace and deadly three-point shooting.

Fun fact: According to Sports-Reference.com, the Wildcats are first in the country in allowing opponents to hit 36.1 percent on two-point attempts. It'll be key for them to continue that, but a wonder how they can contain Duke's outside shooting.