Aaron Gordon has been considered a one-and-done candidate for a long time now, and even if the statistical output for the rest of his freshman year doesn't improve, that status could remain the same. So what role would he play at the next level?

One NBA executive has an idea. ESPN's Jeff Goodman asked anonymous front office members about the NCAA's top freshman ($$), and Gordon didn't get the Blake Griffin comparison many have tacked on to him.

Comparison: Kenneth Faried. "I'm not sure this is who Gordon wants to be, but this is who he needs to be. He's a tremendous athlete who brings toughness and energy -- and could be a terrific rebounder at our level." -- NBA executive

The Faried mention makes a little more sense that Griffin, because both players have that same consistent effort that make them excellent rebounders despite their height limitations. Both Faried and Gordon are also limited in terms of skillsets, but that's where this comparison breaks.

Gordon is ahead there. He has great vision and can play a point forward when he's attacking.

The biggest problem: Gordon doesn't have any go-to moves as a small forward. He's not fluid enough to defend perimeter players, he has so-so ball-handling skills to this point and mentally he's still getting used to it. Gordon still must improve his consistency in chasing players around the perimeter and off screens, and he must gain confidence and know what he's doing on the offensive end. 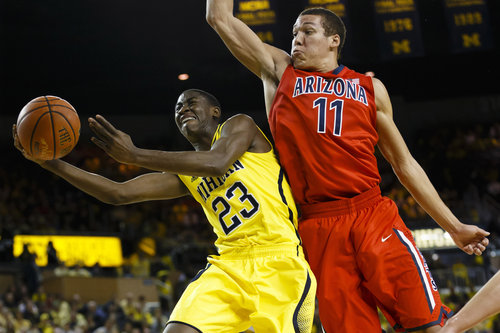 Two travels against Michigan showed Gordon is second-guessing himself. The second turnover on Saturday came as the Wolverines failed to hedge on Gordon as he used a ball screen, but he attacked with apprehension despite the UM defense not being there -- a pull-up jumper or stronger drive would have sufficed.

Defense might be a bigger issue. To my ears, the most sound description of him is that he has stiff hips. Gordon can't change directions all that easy -- watch small forward counterpart Rondae Hollis-Jefferson move in comparison. Gordon, however, did recover in the second half against Michigan to nearly shut out Glenn Robinson III after his big first half.

All the negatives aside, there's nothing wrong but being the next Faried. Gordon is already an elite rebounder whose numbers would be even bigger if he weren't playing next to Kaleb Tarczewski and Brandon Ashley. Last year, Solomon Hill's rebounding numbers dipped dramatically by playing alongside that duo.

Gordon had best embrace the comparison to Faried, at least until his perimeter skills develop. Especially if he wants to make an instant impact after leaving Arizona following this season, the comparison isn't a bad one.