Greg Byrne announced the plans for a $30 million McKale Center renovation with a $6 million dollar donation.

Sean Miller remembers showing sophomore center Kaleb Tarczewski the McKale Center's redone basketball locker room, one of the first steps in a McKale Center renovation that, as was announced Monday, will cost $30 million, according to the Arizona Daily Star. Asking the high school recruit what he thought of the locker room, Tarczewski wasn't impressed.

It was like all the others, he told Miller.

And so the newest improvements may just be needed to play catchup. They're important nonetheless.

In a press conference aired online on Monday afternoon, athletic director Greg Byrne sat with Miller, Niya Butts and UA president Ann Weaver Hart as they thanked Jeannie and Cole Davis for donating $6 million to jumpstart the McKale renovation project. With more than $12 million of the $30 million total already covered, the Arizona athletic program is just trying to play catchup.

When the Wildcats visited Michigan this weekend, they saw what a renovated Crisler Center in Ann Arbor could do for the basketball program. Miller said Michigan's lack of success until recent years wasn't about coaching or about the players. Rather, it was that the Wolverines couldn't attract better players. UM played catchup, and last year they went to the NCAA championship game before falling to Louisville. 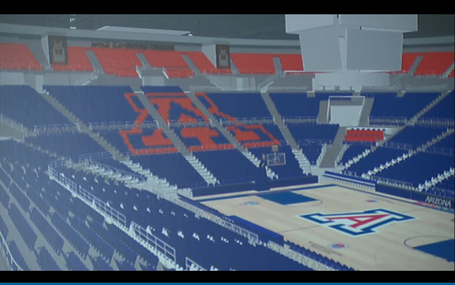 Arizona wants to taste the same success. There were talks and at least thoughts of starting anew with a new basketball arena downtown or across the freeway, but it seems the Wildcats are fine remodeling rather than trashing a historic arena where memories are still relatively fresh. Considering McKale is at the center of the university, it doesn't seem like a bad decision.

Miller called Monday a historic day in the history of the basketball program. It was a good sign for Miller's future, and it was also a reminder he has personally invested a good deal on money in the program. Cole and Jeannie Davis, neither of whom went to UofA, said their interest in helping out the program began once they saw Miller begin the process of throwing his name into the donation well.

He's already doing fine on the recruiting front, but it never hurts to do what's necessary for future success.

What's in a new home?