The investigation of Sean Miller's technical and the Ed Rush controversy

The Pac-12 released the report from an independent firm that reviewed former coordinator of official Ed Rush and the resulting fine against Arizona Wildcats coach Sean Miller.

Share All sharing options for: The investigation of Sean Miller's technical and the Ed Rush controversy

An independent firm ironically named Ice Miller LLP was challenged with investigating the Pac-12's officiating controversy stemming from Sean Miller's technical foul in the Arizona Wildcats' March 15 loss to the UCLA Bruins, and the findings were a bit here and a bit there.

A 58-page report summarized the the investigation that began when CBS Sports broke a story that said Rush had offered a so-called bounty -- such as a Cancun vacation -- if his referees disciplined UA's Miller during March's league tournament.

Nothing is really going to come of the investigation. At all.

In brief statement, Arizona AD Greg Byrne says "We remain hopeful this report will lead to improvements in our officiating program."

The report showed through various accounts from those interviewed that former coordinator of officials Ed Rush wasn't offering a bounty, the game wasn't rigged and Miller deserved a $25,000 fine. In fact, Rush offered he didn't agree with the referees call, even though the referee was adamant through interviews he was calling the game based on both his mentoring and by the letter of the law.

Pretty much, all we learned is that Sean Miller was upset and dropped some F-bombs. Not surprising considering the situation. Not surprising since we know he's an animated dude.

Rushing to his defense 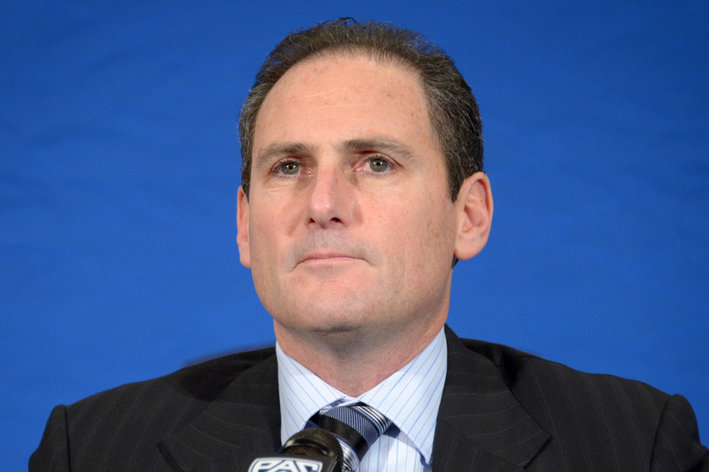 Yet, the end result was Pac-12 commissioner Larry Scott going through his darkest PR saga and defending Rush before Rush's resignation. Miller, however, was also hit with the fine for cursing at the referees after the game and at a Pac-12 representative.

(i) the occurrence, nature, and impact of certain statements publicly attributed to the Coordinator;

(ii) the integrity of the officiating in the March 15th Arizona-UCLA semifinal game; and

(iii) the conduct of Arizona's Head Coach after the Arizona-UCLA game and the
resulting disciplinary sanctions imposed by the Commissioner.

The following were labeled as the core findings of the complete investigation:

I. The Coordinator's So-called "Bounty" Statements Were Neither Offered Nor Taken
Literally

II. The Coordinator's Pre-game Statements Affected The Officiating of Bench Decorum In
The Arizona-UCLA Game

IV. The Disciplinary Sanctions Imposed Upon The Head Coach Were Within The
Commissioner's Authority And Reasonable

The findings, Part i -- Was the bounty taken literally?

After the Wildcats had beat the Colorado Buffaloes, which effectively set up the battle against UCLA, the referees met with Rush to discuss their performance. While there were very different perspectives, the idea between all the referees was clear; they were to watch bench decorum more carefully.

At another meeting before the UCLA game, there were various understandings of how Rush's comments that ultimately got him fired came across. Some officials believed he was genuinely perturbed, but none figured his comments about a vacation were more than a joke.

However, some of those interviewed said Rush was very critical of Miller's sideline antics. In other words, Miller was a target but that's not necessarily a sign the Pac-12 was acting with bias.

The report also mentions that the officials deemed in Rush's club and those considered antagonistic toward him did not have correlating degrees of criticisms or agreements of Rush's handling of the situation.

So no, the bounty wasn't taken literally.

The findings, Part ii -- The Call

Before the UCLA game, the officials and the head coaches met to discuss an emphasis on bench decorum. The benches would receive an informal warning and then a formal warning before a technical with the third warning.

Miller and the UA assistants called the discussion "unusual" but they told investigators they understood the emphasis on leaving the bench. So did UCLA coach Ben Howland, who after the game guessed Miller's leaving the bench was the reason he earned the technical.

But as it turns out, Miller was not alerted to one bench warning and then earned a technical foul.

Arizona's bench was responsible for making sure the Head Coach knew that that Arizona was operating under a bench warning. Unfortunately, when the Head Coach stepped onto the court at the 4:37 mark, he was unaware of the bench warning. Even though the Head Coach was only three feet in front of Arizona's bench, only on the court for a few seconds, and not swearing or inciting the crowd, the application of the bench decorum protocol set forth in the NCAA rules and reiterated by the officials in the pre-tip meeting dictated that the coach receive a technical foul. Consequently, under a strict application of the rules, the technical foul on the Head Coach is a defensible, correct call.

The game official who called Miller's technical maintained that Rush's comments prior to the game did not change his officiating, and it was also noted that he called two bench warnings on UCLA during the game.

Finally, we reach Miller's actions following the game. Miller was fined $25,000 for first cursing three times at a game official following a final buzzer. Per the official:

"I'm standing in front of the Arizona bench when the that horn sounds, and [the Head Coach] takes several steps towards me and says, 'Fuck you, fuck you, fuck you' in a very animated, angry manner, with saliva blowing out of his mouth. [...] I was facing the players on the court, and right after the final buzzer, the next thing I knew was he was on top of me. [...] I was startled and really shocked, but I didn't respond verbally. I didn't say a word to him. I didn't touch him. I just kind of took a step back and tried to distance his face from myself, and then I walked off the court or ran off the court. [...] I've never had a coach rush toward me after a game and yell profanities at me."

Miller's hot head continued into the locker room. On the way, he was criticized for taking his anger out on a Pac-12 banner. But along his walk was someone described as a junior staff member. This Pac-12 representative ultimately became an bystander that Miller claims was not a target. He told investigators that he didn't notice the staff member, and the staff member also acknowledged that Miller was so upset that he/she wasn't certain Miller was directing his comments at him/her.

Although the Head Coach never stopped in the hallway, he did yell words to the effect of, "Fucking Pac-12," "Bullshit conference," "Cheating conference," and, "Cheating-ass conference" toward the prominently displayed Pac-12 banner in the interview alcove near the locker room entrance.

The junior staff member got involved by warning higher-ups about Miller's anger, specifically to keep Pac-12 cameras away from the Arizona locker room.

Rush offered a proposed $25,000 fine similar to ones handed out in the NBA, where Rush was formerly employed. Scott offered to relinquish the fine, however, if Miller would apologize, meet with Rush and himself, and would work with the school to avoid similar situations.

This is where Miller refused, saying an apology would be an admission of targeting the junior staff member. Also, the CBS report of Rush's bounty led Miller to believe the coordinator was against him, and an "anger management plan" was "demeaning."

The investigation found that Miller's fine, although $15,000 more than the most pricey fine handed out by the conference in its history, was appropriate based on regulations of sportsmanship. And considering Miller denied a way out of the fine, it was not inappropriate.