Former Arizona Wildcats forward Grant Jerrett was picked in the second round and could grow into the definition of an NBA stretch power forward.

Updated (11:22 p.m. PT): Jerrett was traded to the Oklahoma City Thunder late Thursday night, according to Jason Quick of the Oregonian and confirmed by the Thunder's tweet.

The Portland Trail Blazers pulled the trigger on former Arizona Wildcats forward Grant Jerrett with the 40th overall pick on Thursday, making him the second UA player taken in the 2013 NBA Draft. Late Thursday, the Blazers traded Jerrett to the Oklahoma City Thunder for cash.

How deceiving was Jerrett's potential when it came to him coming out early?

He was taken just one pick after former Arizona commit and Kansas senior Jeff Withey. The point? Withey stayed four years, became one of the best shotblockers in the nation and still feel. Meanwhile, Jerrett put transferring out of the question and became a young project that went in the second round without risking sitting out a year, playing a subpar season and then falling off the radar of NBA teams.

The Trail Blazers have space on the bench, and they might have more holes to fill if they ship out an unhappy LaMarcus Aldridge. Jerrett isn't ready at this point but it's, again, about potential. 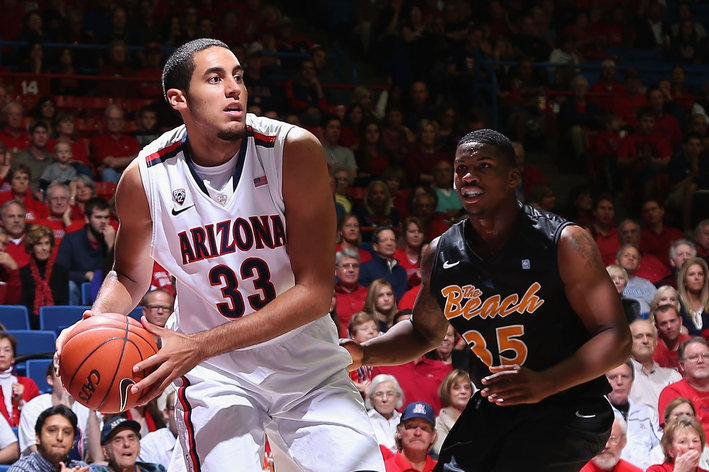 Jerrett's 5.2 points and 3.6 rebound averaged in just less than 18 minutes played per game during his freshman season could point to question marks about why he's here at all, but it should be more of a sign that he has the potential to grow into an NBA player.

His skillset is rare and for the NBA he falls into a niche that has a good amount of value.

For all the emphasis pushing toward spread floors and having four shooters, the ability to play with a true power forward is rare. Jerrett is a true power forward. His length and instincts could make him become a decent-to-good shotblocker at the next level.

But for now, Jerrett will most likely gain the most from seeing floor time, and at this point that might only happen in the D-League.

The Thunder's D-League affiliate, the Tulsa 66ers, have been a huge part of the organization as one of the better NBA minor league squads. They have been key in developing raw project picks such as Jerrett, including former Baylor Bears small forward Perry Jones and UConn Huskies swingman Jeremy Lamb.