Grant Jerrett proved the doubters wrong about his decision to go pro.

People scoffed at then-Arizona Wildcats forward Grant Jerrett. When it first appeared that Aaron Gordon's arrival might cause Jerrett to transfer, a leap to the NBA appeared even more ludicrous.

He put up five points and less than four rebounds per game, playing 17 minutes per. Jerrett came and went without an immediate impact or a lasting impression. He was blasted for not understanding his value. Spending a year fiddling around in a deep rotation of big men would help his cause, pessimists said. Maybe it would.

Jerrett went 40th in the NBA draft. The Portland Trail Blazers selected him and traded him to the always-cunning Oklahoma City Thunder. It was 10 spots lower than his own suggested first-round status but at least 20 before many Wildcat fans thought he'd go. It was validation. Oh, and it was well thought-out.

It's easy to defend him now. I always sort of understood his reasoning.

Whatever the case may be, let's at least agree that cursing his name when he made his decision was as trashy as Bill Simmons whining about Doc Rivers' decision to leave the Celtics for the Clippers.

Human beings have changes of hearts, and it's situational.

Simmons wanted Rivers to be honest -- to "own it."

But when the status quo changes, so do comfort levels and feelings. Individual security becomes more important than being "loyal." What about being loyal to yourself?

Like Rivers, Jerrett did what was best for himself. He knew that playing time wouldn't dramatically increase with Gordon, Brandon Ashley and Kaleb Tarczewski on board. If he transferred, he'd likely have to sit out a season before returning as a 22-year old before he played his first NBA game. 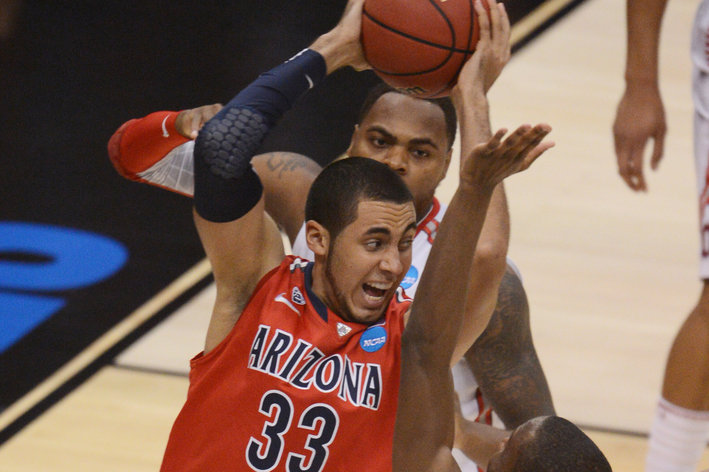 The initial look at Grant Jerrett's decision to leave UA

The NBA Draft is about potential. Running the risk of staying at Arizona and failing to really, really separate himself from Ashley, Gordon and Tarczewski was too great. So was transferring and entering the draft as a near-22-year-old.

After all, the 2013 draft showed that even domination means little. Jeff Withey, the former Arizona recruit who became one of the elite niche players in the league because of his shotblocking -- another of the most-coveted NBA skills -- fell to 39th, just one pick before Jerrett. And he squeezed out all his eligibility in the process.

Jerrett, meanwhile, was selected before fellow stretch 4s in Florida's Erik Murphy and Duke's Ryan Kelly. Think about that -- potential is a big deal.

OK, so what does potential mean if he never makes it?

Being selected at all means a team is clear about Jerrett's need for development. That means playing time. At Arizona, he'd had a limited amount considering the extreme restrictions on the amount of time college coaches can work with their players -- another issue for another day. Transferring would be the same deal, and he has to sit out a season.

The Thunder know what they're getting into. They have a deep-rooted commitment to development with the Tulsa 66ers, their D-League squad. When Jerrett officially entered the NBA, I said his projected path could be similar to Daniel Orton's.

One player that reminds me of Jerrett is former Kentucky Wildcats big man Daniel Orton. The Orlando Magic took a risk on him, taking him 29th overall in 2010 despite him playing 13 minutes a game for a very good John Calipari squad. Though he's more of a beefy player than Jerrett at 255 pounds, he was a one-and-done who likewise was without much college production. He's very similar to Jerrett in this regard.

And though Orton has played in 28 total games through two NBA seasons, he's yet to get a chance to shine. The Magic ultimately traded him to the Oklahoma City Thunder -- they're one team who loves to stash raw young talent on their D-League squad.

Now he and Orton are on the same team. That's not to mention former potential lottery talent Perry Jones III and former UConn swingman Jeremy Lamb.

Jerrett will find his coveted playing time in the D-League on a club committed to growing its own products.

But let's get back to Jerrett's decision.

If we're talking about loyalty, let's look at Jerrett as a person. He's no different than the college kid who earned a B.S. bachelor's degree in political science -- I should use journalism, but that would be a personal attack on myself -- and was OK with getting smacked in the face by the tough job market rather than putting off the real world with a graduate degree.

He's a pro now, and he'll have to work to make it turn out well. So be it.

And thus far, he's validated in taking the risk.