The Arizona Wildcats legend wants another shot in the league before he turns to coaching.

Former Arizona Wildcats guard Mike Bibby isn't done in the NBA -- in his mind. The 14-year pro told The Kings Blog's Alex Kramers that he wants to land in the NBA next season for a victory lap of sorts.

It's hard to see an NBA team picking Bibby up considering his injury issues and receding athleticism that last showed when he was a reserve guard for the New York Knicks in 2011-12. 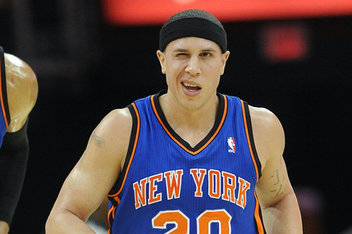 Mike Bibby gets tossed from a high school basketball game

The only spotlight on Bibby during 2012-13 came as his son, Michael Bibby, shined for Bibby's alma mater, Shadow Mountain High School. The elder Bibby was thrown out of a game to simultaneous ASU and UofA chants after arguing and then being tossed by high school referees.

Here are some of the more interesting Q&A snippets from Kramers' article with Bibby, who holds the Sacramento Kings' career assists record:

Who were the toughest players you went up against in your career and how did you prepare to face them?

Take me back to the closing seconds of Game 5 of the 2002 Western Conference Finals and your unforgettable game-winner against L.A. What do you remember most about the finish?

"I remember telling Chris (Webber), ‘If you give me the ball, I'm going to make the shot.' Chris was the man, but I just figured that if he didn't take it, then give it to me - I'll make sure I'll make it."

Which players did you admire growing up, and who did you model your own game after?

"A lot of point guards - Jason Kidd was my favorite player growing up."