The adidas Nation basketball camp was held last week without too much hoopla. A championship game aired on ESPNU, but the event still goes back to its bluegrass roots. Some of the top targets of the Arizona Wildcats and coach Sean Miller played against one another, and all of them looked quite good -- in flashes.

There's a concern that the international game is catching up with the Americans, but nonetheless, there's a reason the American teams put two teams loaded with 2014 prospects in the championship game of the tournament and a team of 2015 prospects in the third-place game.

Not only did the event give an opportunity for top overall 2014 prospect, Jahlil Okafor, to perform with teammates Justise Winslow and Stanley Johnson. Okafor played against fellow center and fellow top-5 recruit Myles Turner -- this is a guy who a year ago wasn't even on the board. 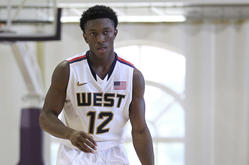 Check out other stories about the 2014 recruiting class

Johnson, a Mater Dei High School wing, and Winslow, out of Texas, are both top-15 prospects with Arizona on their lists.

Some of those lists shortened.

Turner is down to Arizona, Duke, Lousville, Kentucky, Ohio State, Oklahoma State and Texas, according to CBS Sports. Okafor, who is being called a package team with guard Tyus Jones, is visiting Duke, Baylor, Kentucky, Kansas and Arizona. He'll come to Tucson on Oct. 11. Johnson also has a list of eight, as does Winslow.

There's a lot to be uncovered in terms of where they're thinking of playing.

But there's a lot known about their games. Here are what the experts are saying after the adidas Nations event last week.

Turner had a quiet game against Okafor in the championship bout but had four blocks in a 81-77 victory. Here's ESPN's Dave Telep (pay-wall):

Basically, the buzz began in April and climaxed at the NBPA Top 100 Camp in June. In the span of months, he went from unranked to No. 10 in the 2014 class. Juxtaposed with Okafor, you see areas where Turner is strong and areas for improvement. Defensively, Turner changes the game in a way other bigs in this class can't. He can make 3s and is also a good passer. Body-wise he should fill out eventually, but he's behind in that area. Skill-wise, the tools are there, but they need sharpening.

Johnson scored nearly 12 points a game in the event and had a 17-point, 11-rebound finale. He will visit Arizona on Sept. 14, and Telep calls him a future All-American.

He has a strong body, improved skill set and ever-improving athleticism -- and he's a two-way player. Johnson is a foxhole guy -- you want him on your team. He could be your No. 1 scorer, a top defender and your best wing rebounder. He's also good without the ball and a valued teammate, and there's a competitive fire that burns in him.

Simply put, Okafor is the crown of the 2014 class and it's probably not even close. At this point, he's the No. 1 overall pick in any 2015 mock draft and with a slimmed down body seems determined to keep it that way. While Okafor put up unassuming numbers at adidas Nations, he played smart basketball against double-teams and did nothing to hurt his stock.

Winslow's best strength is his defense -- that comes with a relentlessness that makes it obvious why Miller likes him as a prospect. While he's similar to Johnson, Winslow does have more of a true niche at this point. He was rated the No. 10 prospect during the 2012 Red-Blue game while Johnson came in at 23rd -- now it's Johnson peeking at the top-10 at No. 12 while Winslow has dipped to 15th.

In addition, watching the defensive pressure of ESPN 100 small forward Justise Winslow (Houston/St. John's) was something I won't soon forget. I don't think anyone hawks his man and attaches himself to an opponent the way Winslow does. I know I haven't seen anyone with the pride he shows on that end of the floor.