After weeks of waiting, the NCAA finally approved forward Zach Peters to play immediately after transferring from Kansas.

The Arizona Wildcats received a big bit of good news Thursday. Kansas transfer Zach Peters has gained eligibility to play as soon as his recovery from multiple concussions allows him. He will have four years of college basketball remaining.

From the team's press release:

"Today's news from the NCAA is very exciting for Zach and his family, as well as our basketball program," Arizona head coach Sean Miller said. "There was a lot of effort and cooperation that went into this waiver process. We'd like to thank the NCAA, the University of Kansas and many members of the Arizona Athletics family for their tireless efforts to make this a reality.

"To this point, Zach has participated with us and we're still in the process of him returning to full competition and contact. Zach has made tremendous progress in his time at Arizona, and we're optimistic that with continued improvement, that time will come in the near future." 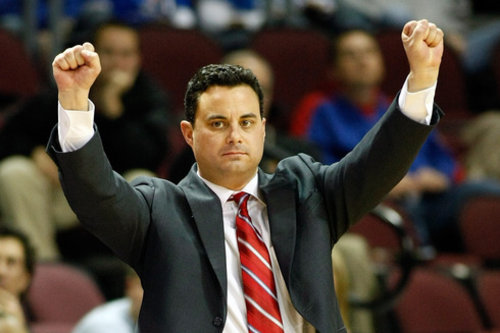 How and why Zach Peters found himself at Arizona

Depth was actually an issue for Arizona in the frontcourt. Aaron Gordon's ability to play power forward and small forward -- if not also center -- would have been helpful, but aside from him, the Wildcats would not have much at center or power forward behind Kaleb Tarczewski and Brandon Ashley. Matt Korcheck was bound to see a lot of opportunity, but now the Wildcats could have a skilled forward who can stretch the defense a la Grant Jerrett last year.

Peters, of course, is still recovering from concussion issues that caused a transfer from Kansas.

At this point it's unclear whether Miller's rant at media day about the NCAA's slow process, as detailed by the Daily Star, had any impact on the situation. Said Miller of the resolution on Peters eligibility on Wednesday:

"It's probably as simple as one person picking up a piece of paper, walking 50 feet and dropping it off on a desk, and that (next) person picking up the paper and putting a check mark on it. But we're not there yet."