T.J. McConnell has one gaudy stat heading into a matchup where he may need to lock down point guard Jahii Carson.

The way we look at defensive impact depends on the position. At Arizona, big men Kaleb Tarczewski and Brandon Ashley are about altering shots at the rim and playing the pick-and-roll. At the wing for Nick Johnson, it's about locking down an perimeter scoring threat.

Maybe the biggest piece to the Arizona Wildcats' defense on Thursday against the Arizona State Sun Devils starts at the point of attack. Because it's hard to see Nick Johnson defending anyone but transfer guard Jermaine Marshall, Arizona's T.J. McConnell will likely be tasked with defending ASU point guard Jahii Carson, who had already declared himself an NBA Draft participant before the season began.

It's a dangerous time for Arizona, which at 17-0 is fighting human nature. Carson, meanwhile, will no doubt be looking to shake a dry spell. Over the last five games, the sophomore point guard has shot 35 percent from the floor and turned the ball over 22 times to go with just nine assists.

Carson's scoring ability is only part of the story when it comes to McConnell's defense. In fact, the UA point guard has shown he's been able to disrupt more than individuals -- even as much as, say, ASU center Jordan Bachynski has been able to help the Sun Devils' team defense with his shot-blocking ability.

McConnell and Bachynski are both in the top-10 in the nation with 1.6 defensive win shares, which reflects a player's total defensive impact by turning points allowed into a statistic based on wins. 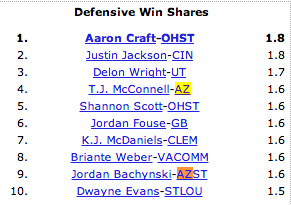 So while McConnell is coming off his season-high of 19 in UA's win against the USC Trojans, and while he's been lauded for his passing, it's on the other side of the court where he could hurt the Sun Devils the most.

Bachynski is leading the NCAA with 4.6 blocks per game, which will limit the Wildcats' interior scoring opportunities, but the Wildcats should be able to limit the 7-foot-2 center on the other end with Tarczewski leading the way.

Nick Johnson is a solid option to defend Jermaine Marshall, as is Rondae Hollis-Jefferson or even Aaron Gordon for a spurt or two. Marshall, the transfer from Penn State who was good enough to average double-figures for a bad Big Ten team in a difficult conference, has paced ASU recently, recording two 20-plus point outings in his last three games.

During the Pac-12 coaches teleconference call on Tuesday, Miller compared his influence to that of Mark Lyons -- at least in terms of experience.

"A lot like Mark Lyons did for us a year ago, it's not just his points per game," Miller said. "He's all-conference type of player."

Marshall is shooting 46 percent from three, so don't expect Johnson to be attempting to help off the ball very often. The other Arizona players, McConnell included, will need to keep their opponents in front of them. Luckily for the Wildcats, after the starting ASU backcourt, that should be deemed quite doable.