There are still three....THREE unbeaten teams in college basketball

Share All sharing options for: Arizona, Syracuse and Wichita State all remain unbeaten

Another week has gone by in the college basketball season, and the Arizona Wildcats, Syracuse Orange and Wichita St. Shockers have still not lost a game.

While Wichita St and Arizona dominated their opponents this week, Syracuse narrowly escaped the Pitt Panthers by a score of 59-54 in front of 30,000+ fans at the Carrier Dome.

More: Syracuse coverage at Troy Nunes is an Absolute Magician

Tyler Ennis led the Orange to the victory thanks to 16 points, and two huge buckets at the end of the game to put Syracuse in front and then eventually seal the win. Jim Boeheim only played seven guys for the entire game, similar to a typical Arizona rotation.

School in the Desert 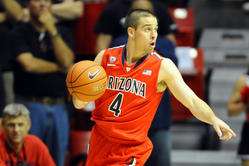 The Shockers welcomed Indiana St. to Charles Koch Arena for what was supposed to be Wichita's toughest game of the year in the Missouri Valley. But that was not the case as the Shockers dominated the Sycamores from start to finish and ended up winning by 20.

Ron Baker led the way for WSU with 16 points, slightly higher than his season average of 12.8 points per game. The Shockers' leading scorer this season has been Cleanthony Early, who has averaged 16 per game.

Mid-Major Madness: Start Watching the Shockers after this domination

But if that was the toughest challenge for Wichita in conference play, it seems like they are the most likely team to finish the season unbeaten, right? Let's take a look at the next five games for all three of these teams:

February 1st could end up being the interesting day with Arizona visiting a Cal team that has now moved to 5-0 in Pac-12 play after sweeping the Washington schools this week in Berkeley. Combine that with the Syracuse/Duke matchup and all of the sudden you could be looking at two of the unbeatens going down on the same day. I wouldn't guarantee Syracuse gets through Miami and Wake on the road, especially Wake.

Arizona of course needs to take care of business at McKale Center against CU and Utah before any of this matters anyway.

After the Arizona/ASU game, KenPom tweeted out this, meaning there is starting to be a real chance of a team finishing the regular season unbeaten.

Chance of at least one team finishing regular season unbeaten up to 25%.

Wichita State has the easiest road, but will a team finish the regular season unbeaten for the first time since 2003-04 when St. Joseph's became the 24th team in history to do so.

What team do you think will lose first and will their be an undefeated team for the 2013-14 regular season?