The Arizona Wildcats received a confirmation that Brandon Ashley will be out for the year with a broken foot.

The Arizona Wildcats learned Sunday that forward Brandon Ashley will not return this year after suffering a foot injury in a loss to the California Golden Bears. Said UA coach Sean Miller in a statement:

"While we're all disappointed, we are also aware that Brandon needs our support and positive energy surrounding him," Miller said in the statement. "Someone once told me, the hottest heat forges the strongest steel. This adversity will ultimately make Brandon and our team stronger moving forward." 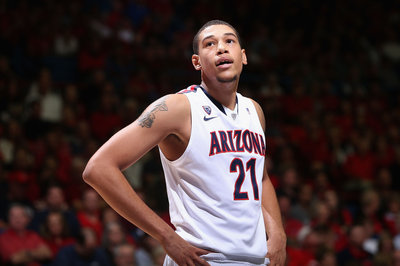 Where does Arizona turn with Brandon Ashley sidelined?

It's expected that Ashley has a broken foot, though the Arizona press release issued to media outlets did not specify the severity of the injury. Ashley finishes the season with averages of 11.5 points per game and 5.8 rebounds per game.

Now, the Wildcats will be forced to move forward with Rondae Hollis-Jefferson taking Ashley's place in the starting lineup, and with Gabe York and Jordin Mayes' roles becoming bigger as Arizona is forced into more three-guard lineups. Matt Korcheck could also earn more time in the frontcourt, but he's less of a known factor than the depth at guard.

And in general, Arizona's interior defense suddenly takes a step backward, and the Wildcats' tournament hopes take an enormous hit.

Immediately, Arizona likely sees a drop in the rankings, and while it should still be able to win a good amount of Pac-12 contests, the likelihood of easily moving deep into the NCAA tournament suddenly decreases.

Miller will now be tasked with developing a gameplan that gives a more perimeter-oriented but less talented shooting lineup better opportunities.