Cal vs. Arizona, time and TV: Redemption or staying the course?

California was the first team to beat Arizona, but this is about staying the course, not getting payback.

Share All sharing options for: Cal vs. Arizona, time and TV: Redemption or staying the course?

When Justin Cobbs' fadeaway shot swished through the bottom of the net on Feb. 1, it was only one of a long list of bad things that'd happened to the Arizona Wildcats. Nick Johnson and T.J. McConnell had their worst games of the year. Aaron Gordon was in the midst of a slump.

Worst of all, Brandon Ashley was lost at the beginning of UA's first loss of the season, leaving a very good team scratching at the door of knowing how to play with one another.

When one piece of a fragile basketball ecology is taken out of the equation, it takes a while to rebound. As Arizona hosts the California Golden Bears on Wednesday, everything seems to be back at where it was before Ashley's injury.

"Can't bring him back, can't talk about it either. Every day since his injury we've gotten better." -Sean Miller

The Wildcats have found new life, and as such, it's not about revenge.

"I don't really believe that's the case," Miller said during a teleconference call Tuesday. "We respect Cal a great deal. That night, they were better than we were. I think each team probably had a handful of possessions ... where the gone could have gone either way."

Imagine that. In hindsight, a loss to Cal doesn't look bad at all. For one, the Golden Bears aren't terrible. For Ashley's injury to happen early, for everything to go against Arizona, and then for the Wildcats to lose only by a great shot in the final second -- not too bad if we're forgetting that the Wildcats won't have Ashley for the rest of the year.

"Can't bring him back, can't talk about it either." Miller said.

"Every day since his injury we've gotten better."

What the Wildcats can do is play for Ashley. Cal coach Mike Montgomery doesn't see a whole lot of changes with UA since the injury to Ashley. He knows the Golden Bears only face a tougher task of a team that's used less than a month since its loss in Haas Pavilion to reconstruct a defensive power. And the offense is clicking too.

"They've been good al year, they'll continue to be good," Montgomery said. "I don't know there's a drastic difference. They're third in the country for goodness sakes." 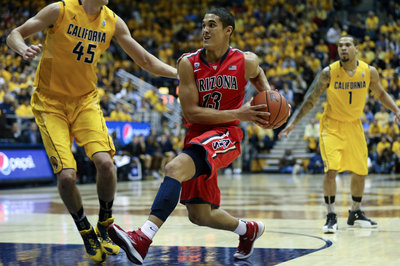 We answered some Arizona questions over at California Golden Blogs

How good is Arizona? Numbers in college hoops are quite hard to consume considering nobody plays in any semblance of a round robin. In the NBA, offensive and defensive ratings have a somewhat common relationship between teams on opposite sides of the league. In the NCAA, nonconference schedules and conference schedules muddle everything.

So consider Arizona's numbers with a grain of salt.

"I see just a pride and a grit and a determination from their entire organization, from their coaches to their players," Colorado coach Tad Boyle said on Tuesday in a teleconference call. "It's hard to put into words how good they are defensively, just the pride they take in stopping people."