Arizona got Utah on its heels, and the result was a dominating blowout where suffocating defense led to efficient offense.

LAS VEGAS -- This is how good they can be.

When the Arizona Wildcats are using their intimidation tactics on defense to push the pace and find early offense -- if not transition layups or dunks -- they're not going to lose a game. The issue has been the development of the defensive mindset being so tethered to the defense.

Instead, the Wildcats bullied Utah defensively, then got into transition. The result was a  71-39 victory that puts Arizona in the semifinal round of the Pac-12 Tournament. With the win, Sean Miller's crew advances to play the winner of Colorado and Cal at 6 p.m. MST on Friday.

The Wildcats' identity has come and gone in the last month or so, but perhaps this was the eye-opening game where they realized just how dangerous they can be with the defense forcing misses -- not necessarily even turnovers -- and the offense playing off of it. 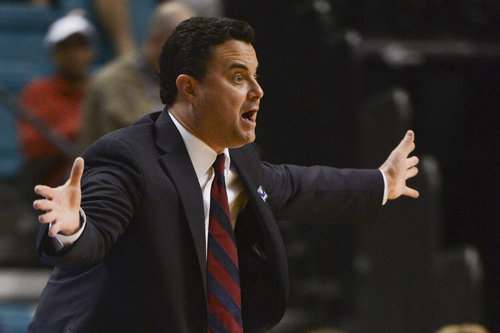 Sean Miller gets two stellar compliments about his defense

Arizona scored an efficient 1.20 points per possession and held Utah to a miserable 0.65. Miller's team hit 53 percent of its shots and held the Utes to 26 percent.

Behind the defensive effort was Nick Johnson and Aaron Gordon. Johnson held the versatile Delon Wright to five points on 1-of-8 shooting, and Utah forward Jordan Loveridge, who averages 16 points per game, went 0-for-6 from the field to score two points.

Early on, Arizona appeared reluctant to do anything but force the ball inside to center Kaleb Tarczewski, but perhaps it was by design. The Utah defense sunk in, the spacing for UA to drive to the hoop or even throw an entry pass wasn't there. Tarczewski didn't have many chances to score in the post, but the threat was all UA needed. Arizona took six early threes and made just one, a Gabe York hit after an offensive board.

And then, suddenly, everything opened up.

A few three-pointers dropped, freshmen Gordon and Rondae Hollis-Jefferson forced a few turnovers and scored in transition, and in the halfcourt, the lanes began opening as the Utes worried about allowing any more three-point attempts.

UA led 34-13 at half. First, Arizona held Utah scoreless for eight minutes, where a 7-6 Utes lead turned into a 22-6 Arizona advantage. The Wildcats scored 1.21 points per possession to the Utes' 0.48, hit 50 percent of their shots to 26 percent. It didn't get easier in the second half with Arizona continuing to score efficiently and silencing Utah's offense.

The Utes didn't score their first field goal until more than nine minutes had passed in the second half -- all in all, Krystkowiak's team didn't hit a shot for more 13:02 minutes of game time that bridged the two halves.

In just 26 minutes of playing time, Johnson scored 12 first-half points but needed just two more in the second half. T.J. McConnell added 13 points and four assists and led the team with 27 minutes, and Hollis-Jefferson added seven points and eight rebounds.

Arizona should be well-rested for the rest of the tournament. The next question to ask: Can they put together a run of games like this that hits three games? And how about six?