Think Sean Miller is a good tactician? So does Larry Krystkowiak.

LAS VEGAS -- Smack dab in the middle of Arizona's 71-39 rout against his Utah Utes, Larry Krystkowiak tried to help his team find answers to operating against a hounding defense.

"I was looking through the play sheets ... I wasn't optimistic a whole lot was going to work," Krystkowiak said. "We just didn't have anything in our playbook that could counteract the emphasis they had in playing D."

That was Krystkowiak giving Miller the ultimate compliment. If it wasn't an admission to being out-coached, at the least, Krystkowiak used a look-in-the-mirror-inducing loss to show his Utah team where he'd like to see them grow. Back at Pac-12 headquarters, former UA interim coach Kevin O'Neill said the Wildcats looked like they had rabies -- remember, O'Neill is the guy who in the 2011 Pac-12 Tournament predicted Arizona to challenge for a title.

Which compliment toward Miller is better is hard to say. 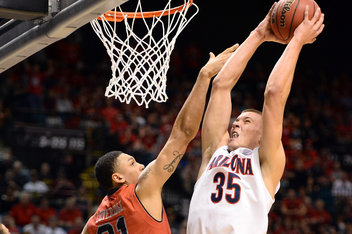 "It's nice of Larry to say," Miller said after hearing Krystkowiak's compliment.

An inflated score should be taken with a grain of salt, if only because the Wildcats showed inconsistencies toward the end of the year.

Still, there's no getting around how good the defense can be.

Arizona held the Utes to 0.68 points per possession; for perspective, scoring 0.8 points per possession is considered poor. The Utes were 26 percent shooting for the game and had just 12 total makes from the field. While many came off makeable shots, the snowball effect, pressure from an Wildcat-friendly crowd and a few big shots from Arizona made them tougher than they might look without context.

Yet, Arizona's defense took a good deal of opportunities away.

"For us to only score 13 points, you can't really shoot that bad," said Utah center Dallin Bachynski. "Some shots we know we could have hit were not falling. The majority of it was their defense."

Miller said he saw something in the Wildcats' last game against the Utes.

In Salt Lake City, guard Delon Wright made the Arizona coach worry about pick-and-roll coverage. So with Wright coming off a 15-point game on Wednesday where he pushed the Utes past Washington by getting to the foul stripe and dolling out four assists, something had to change. The Wildcats blitzed ball handlers off pick-and-rolls and weren't afraid to switch Aaron Gordon or Rondae Hollis-Jefferson at times.

Even off the ball, Krystkowiak said sets designed to free up players with off-the-ball screens proved futile.

And when the defense settled in, the offense clicked.

The Wildcats' outrebounding the Utes 39-24 was partially about forcing misses and making more of their attempts, but UA still had two more offensive boards than the Utes did off their misses. Utah got another offensive possession on just seven of their 37 misses (18 percent), while Arizona grabbed nine of their 24 misses (37.5 percent).

"I think that's been our biggest thing this year really," said UA guard Nick Johnson. "We get stops, get rebounds, get to push, our athleticism is really at play. I think finishing with dunks and around the basket gets everyone going."