A battle of Wildcats in San Diego on Friday

The Arizona Wildcats now know the road that they will have to take to Dallas.

That road starts in San Diego, and Weber State is the first road block. 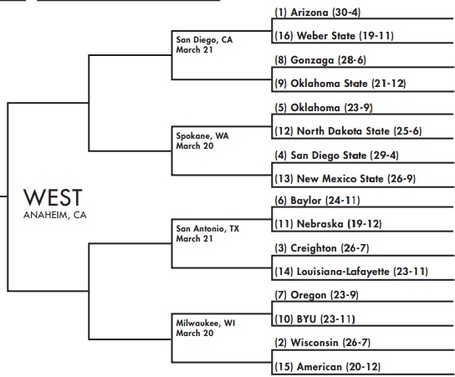 No surprise that Arizona is a top seed in their region, and for a long time, they've been projected to be in the West Region, which will take place in Anaheim.

San Diego to Anaheim to Dallas.  Simple as that.

Weber State is the Big Sky regular season and tournament champion.  The Wildcats from Ogden, Utah have played a couple of tournament teams this year.  In November, they lost at BYU 81-72, and they also lost at UCLA by a score of 83-60 just before Christmas.

A former Weber State player you may know is Damian Lillard.  He's easily the biggest star to come out of the Big Sky in basketball in a long time.

There's no Lillard on this team, but Weber does have at least a little bit of basketball tradition in recent years.  Could be interesting.

Of course looking forward, Oklahoma St. or Gonzaga sit there for Sunday's game, and then a possible rematch against San Diego St. in the Sweet 16.

More on the tournament from us later.