Losing their starting forward could have hurt the Arizona Wildcats on the court, but it's a lesson that could make Sean Miller's team playing with an extra sense of urgency.

When Brandon Ashley went down on Feb. 1, the Wildcats lost 60-58 against Cal. Initially, the potential for it to be anything serious was less on everyone's mind than was Arizona suffering its first loss of the year. 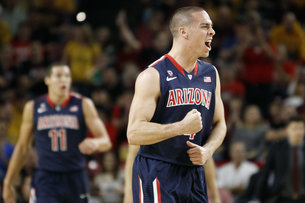 Once it was determined Ashley suffered a significant foot injury, there worry was about depth. Quickly, it grew into something more. It didn't take long for fears to arise about how much the Wildcats missed Ashley on the offensive end. Not only was he one of the team's best and few floor spacers, he was one of few UA players able to create baskets for themselves.

When Arizona lost to Arizona State in double-overtime two weeks after Ashley's injury, on Feb. 14, it was obvious how much opposing defenses could sit in the paint and clog up any driving lanes for T.J. McConnell, Nick Johnson, Aaron Gordon or Rondae Hollis-Jefferson.

It was on Sean Miller to delve into the bench further, and he promised after UA's second loss that the Wildcats would do just that.

Heading into the NCAA Tournament, Miller and the Wildcats have successfully moved on from Ashley's injury. It's hard to say how much of a better position they'd be in with him.

A loss to UCLA in the Pac-12 Tournament Championship game was the first of four losses in 2013-14 that may not have been any different had Ashley been healthy  -- the Oregon defeat to end the regular season seemed like a simple result of a Ducks team playing for a lot more than the Wildcats, though that should never be a great excuse.

Against the Bruins on Saturday, the Wildcats fell not because of a lack of offense or a lack of depth. Foul shooting was and will always be the biggest worry for Arizona, but it's also the one thing that will likely be pointed to as the sole reason for a UA loss. There's never one thing, but for sure, many other teams would take UA's roster, even with it's poor foul shooting.

Arizona lost to UCLA because it wasn't the team making free throws, or plays. But the biggest reason was that Arizona didn't put in a full 40 minutes on the defensive end.

"The couple lessons that I feel like we really learned that will help us in the NCAA Tournament is they shot 58 percent in the first half and at times early looked like we couldn't guard them," Miller said in Las Vegas after the 75-71 loss to UCLA. "We were much better defensively in the second half. But we can't warm up for the first eight or ten minutes, spot them some baskets that we normally don't get and then expect to win in March.

"Number two, we went 6 for 16 from the line," he said. "We talk about this all the time. Free throws win championships."

The evolution is complete

Let's put this season in front of a crystal ball.

It's hard to say the Wildcats are much worse off without Ashley, though it's conceivable they could have been pushing a one-loss regular season in a decent-enough conference. Losing a potential NBA player will always lead to a what-if situation. But would Gabe York, Elliott Pitts and even Hollis-Jefferson have a chance to grow if Ashley's injury never hit?

Miller has successfully found York's and Pitts' confidence, and that duo shot Arizona out of a bad start against UCLA. Arizona's coach said that he expects York to reclaim his starting spot moving forward -- Hollis-Jefferson got the start against the Bruins because of defensive matchups, but that backfired on both ends.

That said, Arizona will ride defense through the NCAA Tournament, as usual.

The Wildcats have evolved and adapted since Ashley's injury. And now they have Ashley to remind them just how fragile opportunity is in college basketball. Still, all that opportunity is in front of them to win it for their injured teammate.