A similar looking Gonzaga Bulldogs team faces Arizona in the third round of the 2014 NCAA Tournament.

Mark Few's Gonzaga Bulldogs are what they've always been -- consistent, well-coached and ready to bust brackets. The 2013-14 version is a less-talented one of last year's squad, which had Kelly Olynyk, now of the Boston Celtics, leading the charge into a top NCAA Tournament seed.

The season: The Bulldogs' win against the Oklahoma State Cowboys on Friday in the round of 64 just might be the most impressive win of the year. Gonzaga went just 2-3 against top-50 RPI teams this season, beating BYU twice but losing to the Cougars once and also falling to Memphis and Dayton. The Cowboys were ranked 45th in RPI, below BYU, but in terms of talent, it was most impressive. The Zags also lost to Portland, San Diego and an NCAA Tournament team in Kansas State this year. 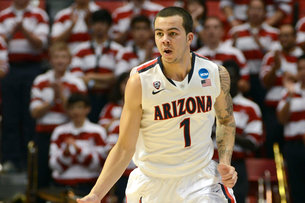 Should Arizona look to push the pace?

Power forward Sam Dower leads the team with 14.6 points and 7.2 rebounds per game and will also be able to stretch the floor with his mid-range jumper that occasionally will bring Aaron Gordon beyond the three-point line. And in the middle, 7'1, 298 pound center Przemek Karnowski will be a challenge for Kaleb Tarczewski with his 10.3 points and 7.0 rebounds averaged per game.

Like the Wildcats, the Bulldogs won't want to run too much but will cause trouble with their sound halfcourt defense. Gonzaga's halfcourt offense (115 points per 100 possessions) will have the advantage on Arizona considering all the shooting on the floor at any one time (39.7 percent three-point shooting as a team), plus Karnowski sucking in the defense. The Zags have a true shooting percentage of 59.2 -- the figure adjusts for three-pointers being worth more as well as free throws -- while Arizona comes in at 54.6 percent.

The kicker: the Bulldogs have the fifth-best field goal shooting offense in the nation, hitting 49.8 percent on the season.

Tarczewski holding his own without double teams will be key, but the Wildcats should have the advantage, as usual, with their athleticism.

Outside of Karnowski, Arizona is the more physical team, and an aggressive UA defense will be needed to disrupt Gonzaga's sets. Defensively, the two teams do it in very different ways. Arizona limits shots at the rim and three-point attempts, but Gonzaga causes more problems at the rim, likely because of Karnowski's intimidating size.

What we learned from the OSU win: The Cowboys' talent led by potentially lottery pick Marcus Smart lost out because of inconsistencies that were displayed throughout the season, while the Bulldogs' solid all-around play won them a game despite being the less-talented team on paper.

The Bulldogs held a 36 percent three-point shooting team -- Arizona also shoots at that clip -- to 3-of-15 from deep and 22-of-37 from the free throw line (OK, there's no such thing as free throw defense, but the point is scary for the Wildcats). Oklahoma State shot 40 percent for the game but got 17 offensive rebounds, something that Arizona can look at as a positive sign.

Sean Miller's team can't allow Gonzaga to hit 50 percent overall and 9-of-18 from three-point range like it did against OSU. And by the way, the Bulldogs also missed 15-of-41 free throws last time out -- so the foul shooting woes could be a two-way street.