There are several mid-major teams to watch for on Sunday

After Saturday's action, only one double-digit seed has advanced to the Sweet Sixteen, and that of course, is the Dayton Flyers, coached by Sean Miller's brother Archie. 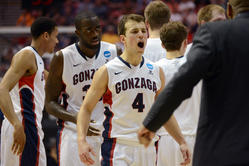 Our preview of the Gonzaga/Arizona game

But there are several other games involving mid-majors that we'll be keeping an eye on throughout the day.

The Shockers are undefeated, and Kentucky was the preseason number one team in the country. Doesn't get much better than that. Cleanthony Early carried Wichita to their big win over Cal Poly with 23 points and 7 boards. But to get past UK, they're going to need a lot more than that. Look for Fred VanVleet to potentially have a big game, and the Shockers show why they're no fluke.

This game guarantees us another double-digit seed in the Sweet Sixteen, which is always good. It also gives us a chance to see if Mercer is a one trick pony with that win over Duke, or if they're more like their Atlantic Sun brethren Florida Gulf Coast.

Of course, Tennessee will have something to say about that, and the Vols have been hot of late. They've won seven of their last eight, and that only loss was a seven-point loss to Florida in the SEC tournament.

The Lumberjacks from SFA have not lost a game since before Thanksgiving. That's nuts. They just win games, as they showed with that late comeback against VCU on Friday. Against UCLA they'll need another balanced attack like they had against the Rams. Jacob Parker led the team with 22 points, and Desmond Haymon had 17. They've been the top-two scorers for SFA all year, so look for them to be the go-to guys against UCLA.

Virginia struggled the most out of the one seeds in their first game, trailing Coastal Carolina well into the second half. And Memphis is always on the priority list of watching because of Josh Pastner. There's already one Arizona-related head coach in the Sweet Sixteen. Why not another one?