The Arizona Wildcats face the Gonzaga Bulldogs, and it'd be nice to see them turn great defense into easy offense.

"Early offense" has become a basketball buzz-word. The analytics movement has further emphasized that attacking early in the shot clock yields better offensive results. Not only do those theories offer that transition buckets are easier, they say that shots later in the shot clock are forced.

The Arizona Wildcats should know that more than anyone. One of the best teams in the country at forcing late shot attempts, Sean Miller's defense has thrived.

So then it's a bit of a wonder why Arizona hasn't used it's defensive aptitude to look for more early offense. According to Hoop-Math.com, the Wildcats are 131st in the nation with 26 percent of its initial shots taken in the first 10 seconds of the 35-second shot clock. Not bad, but certainly not indicative of a team really wanting to force it down opponents' throats off missed shots. 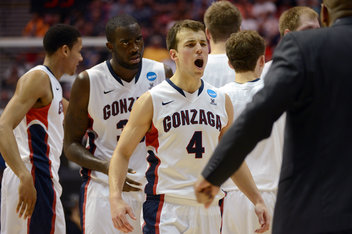 A look at the Gonzaga Bulldogs

For reference, Oregon led all Pac-12 teams by attempting 31.5 percent of its field goals in transition, while UCLA, ASU, Colorado and USC all hovered around 30 percent.

The Wildcats will need to get closer to those numbers if they want to survive a poor shooting outing.

Arizona is bound to have a poor shooting game this tournament, whether it be Sunday against Gonzaga or down the road against San Diego State or Wisconsin. The Wildcats need to find opportunities early in the shot clock. It can pick-and-choose when to attack, because considering the lack of depth, it's certainly not an expectation for UA to run every time down the court.

But the Wildcats are too good of a defensive rebounding team not to keep an eye out for slow transition defenses. Take the Pac-12 Tournament win over the Utah Utes as a prime example. Or the win the next day against Colorado. After all, Arizona's two best players, Nick Johnson and Aaron Gordon, have become a dangerous tandem in transition thanks to their ability to rebound, run and pass.

Gordon's ability to do just that especially brings an added dimension that's shown it can change the complexion of a game.

It can all start Sunday against a Gonzaga team that matches Arizona in size but not in athletic ability. The Bulldogs can defend the rim even better in the halfcourt than the Wildcats thanks to 300-pound center Przemek Karnowski, but he won't be able to run with even UA's big lineup that includes center Kaleb Tarczewski. Best bet is for Arizona to get to the rim before Gonzaga can set up its defense.

If anything, call this a plea for more Gordon-to-Johnson alley-oops.