Arizona basketball's Nick Johnson is among four finalists for the Naismith Award. 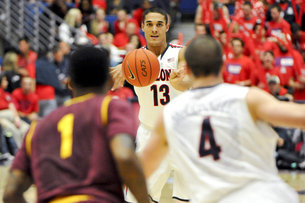 Nick Johnson is finally getting his due

McDermott is likely the leading candidate to win the honor, and the award's committee will announce a winner on April 6 as part of the Final Four festivities.

Johnson has certainly fought hard to earn his way to this point.

Currently, he's averaging 16.3 points, 3.9 rebounds and 2.7 assists per game while playing his usual stellar defense that earned him playing time from the start of his Arizona career three years ago. Yet, it took a while this season for Johnson to get notice on a team that featured freshman forward Aaron Gordon, a game-changing point guard T.J. McConnell, and a frontline that has backed one of the best defensive teams in the nation.

It's hard to say if any one of Johnson, Smith or Parker could top McDermott, whose 27 points and 7 rebounds per game has led Creighton to this point in the NCAA Tournament.

As I write this, Creighton is currently losing to Baylor in the first half of the round of 32. Parker's Duke squad was bounced in the second round of the tournament, and Smith's Louisville team has advanced to the Sweet 16, where it will face a mature-looking Kentucky Wildcats team.