Arizona will play San Diego State in Anaheim on Thursday in the West Regional of the NCAA Tournament.

The Arizona Wildcats will face the San Diego State Aztecs on Thursday with a 7:17 p.m. MST tip time. The Sweet 16 matchup will air on TBS as Sean Miller's team returns to Anaheim, Calif., where they last played in 2011.

During that run, the Wildcats dropped the Duke Blue Devils behind a heavy Wildcat-friendly crowd. Arizona then lost to UConn in the Elite Eight after the Huskies had dropped Steve Fisher's SDSU squad two days earlier. In that Sweet 16 matchup, the Aztec fans showed as well as Arizona fans, making for what should be a split crowd come gametime.

Here's a look at the entire TV schedule for Thursday. 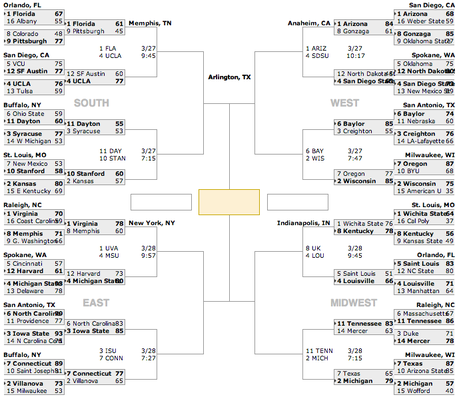